55 Ellen Jane Mainwaring, daughter of Gordon Mainwaring and Mary Hickey was born on 15 July 1845 in Adelaide, South Australia. She died on 1 July 1920 in Southsea, Hampshire, England. She married Wentworth Cavenagh on 16 February 1865 in Adelaide, South Australia. After my great great grandmother Ellen Jane Cavenagh-Mainwaring, formerly Cavenagh, née Mainwaring, inherited the family property of Whitmore in Staffordshire in 1891, the family surname was changed to assume the name and arms of Mainwaring in addition to Cavenagh in acknowledgement of the inheritance. 110 Gordon Mainwaring, son of Rowland Mainwaring and Sophia Henrietta Duff was born in 1817 in Bath, Somerset, England. He died on 21 December 1872 in London, England. He married Mary Hickey on 5 July 1843 in St John’s C of E, Adelaide, South Australia. 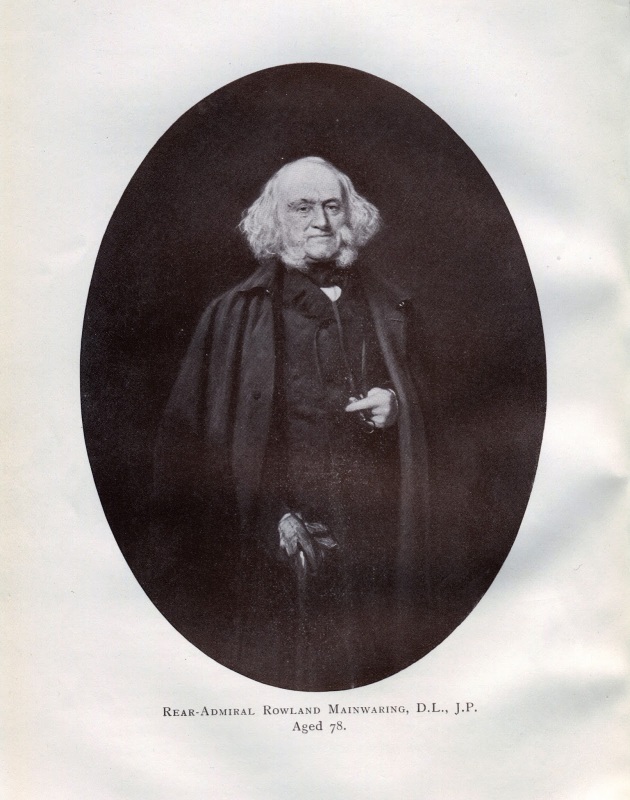 Rowland Mainwaring in 1861 from “The Mainwarings of Whitmore and Biddulph in the County of Stafford. An account of the family, and its connections by marriage and descent; with special reference to the Manor of Whitmore.” J.G. Cavenagh-Mainwaring, about 1935.

Fifth great grandparents
440 Rowland Mainwaring, son of Edward Mainwaring and Sarah Bunbury was born in 1745 in Four Oaks, Warwickshire, England. He died in 1817. He married Jane Latham on 10 December 1780.
441 Jane Latham. She was the daughter of Captain Latham, RN. She died on 23 November 1809.

Further generations back to William the Conqueror