My fifth great-grandmother was Mary Low (1768–1850), born in 1768 in Perthshire, Scotland. The names of her parents appear to have been David and Isabella.

In Abernethy, Perthshire on 24 March 1791 Mary Low married a man named George Taylor (1758–1828). The parish register states that they were both ‘of this parish’. They had eight children:

On Friday 10 January 1823, after a voyage of almost four months, George and Mary Taylor, accompanied by four of their eight adult children, arrived in Hobart, Van Diemen’s Land.

With forty other free emigrants, they had sailed on the Princess Charlotte from Leith, the port of Edinburgh, departing in October 1822.

For the first few months, before receiving their grants of land, George and Mary Taylor lived at the Macquarie Hotel, Hobart Town. On 30 June 1823 he was granted an 800 acre block of land about 30 miles south of Launceston, on the Macquarie River near Campbell Town . George Taylor named his property ‘Valley-Field’. George and Mary’s three sons, George, David, and Robert, each received 700 acre grants of land nearby.

His death was reported in the Colonial Advocate, and Tasmanian Monthly Review and Register 1 May 1828:

On 3 January 1839, eleven years later, Mary Taylor married a Campbell Town builder named Henry William Gage. She was about 70; Henry, 40, a widower, was a former convict.

On 30 July 30 1850 Mary died in Campbell Town and was buried next to her first husband.

I know nothing about Mary’s second marriage. It seems rather surprising that a comfortably-off widow with adult children to support her would choose to marry a man 30 years younger.

Henry William Gage, was a carpenter, born in 1798 in Gloucestershire. In 1830 he had been convicted in for stealing substantial quantities of cheese, butter, bread, tobacco, candles, and a cloth. Sentenced to be transported for seven years, he arrived in Van Diemen’s Land on 26 March 1831 with 167 other convicts on the ‘Red Rover‘. After five years he gained a ticket of leave; a document which allowed convicts to work for themselves provided that they remained in a specified area, reported regularly to local authorities and attended divine worship every Sunday, if possible. They could not leave the colony. In 1837 he was given a Certificate of Freedom; this document was issued at the completion of a convict’s sentence, as proof he or she was a free person. They were free to travel anywhere, and could return to the United Kingdom (if they could afford it!).

Early in 1836, Henry Gage and other convicts were sent to Campbell Town, sixty-odd miles north of Hobart, to construct a bridge (known as Red Bridge) to span the Elizabeth River there. When he gained his freedom Gage settled in Campbell Town and built several houses known as ‘Gage’s Row’ in Pedder Street. He owned three of these and several other properties in Campbell Town. Some are still standing.

After Mary’s death Henry Gage married again, to Alice Lugg, an ex-convict from Cornwall. They had seven children. Most died in infancy.

I am descended from the Taylors through:

George Taylor’s son Robert kept a diary of the voyage, writing mostly about the weather. A fortnight out they ran into a gale in the Bay of and the ship narrowly escaped going ashore at Cape Finisterre. A fortnight later the ship was becalmed for days near Madeira. A gale soon afterwards broke the main topgallant mast.

The diary also mentions troubles among the second class passengers; a cabin-boy being given a dozen lashes for cutting the first mate’s overcoat; a child’s death and the sea-burial, the sighting of two ships and speculation about their nationality; trouble over the distribution of spirits; shooting bottles for amusement; and betting as to when the ship would arrive in Hobart (Robert lost).

The Princess Charlotte dropped anchor in the Derwent River on 1 January.

The Taylor family landed on 10 January.

George and Mary Taylor lived at the Macquarie Hotel, Hobart Town, for two or three months before receiving their grants of land. (The building stood at 151 Macquarie Street but has been replaced.)

The 100th and 150th anniversaries of the arrival were celebrated by descendants of these emigrants. The 200th anniversary  will be celebrated on 28 January, at the end of this month, at Campbell Town.

It is difficult for us now to see Van Diemen’s Land—later officially known as ‘Tasmania’—through the eyes of the recently arrived immigrants. What stood out?

There were sheep, more and more of the woolly chaps, and wheat:

In 1820 the fine-wool industry in Van Diemen’s Land had been founded with the introduction of 300 of Merino sheep bred by the Camden wool pioneer John Macarthur. In the same year Van Diemen’s Land became Australia’s major wheat producer; it remained so until 1850.

There were more and more farmer settlers:

By 1823 pastoralists were beginning to farm the Midlands, and many had settled in the country between Launceston and Hobart. On 30 June 1823 George Taylor received an 800 acre grant of land about 30 miles south of Launceston on the Macquarie River near Campbell Town. He named his property ‘Valley-Field’. His three sons, George, David, and Robert, each received 700 acre grants of land nearby.

In a letter of about 1825 George Taylor describes his early farming results:

In September 1823 the Colonial population of Tasmania was enumerated as 10,009, excluding Aboriginal people, military and their families; there were 6850 men, 1379 women, 1780 children. The majority of the population were convicts. Convict immigration to Australia exceeded free immigration until the 1840s. In the 1820s there were 10, 570 convicts arriving in Van Diemen’s Land and 2,900 free immigrants. From 1801 to 1820 2,430 convicts had arrived and 700 free settlers.

In the 1820s about 3000 Scots migrated to Australia, most settled at first in Van Diemen’s Land. By the end of the decade a third of all landowners in Van Diemans’ Land and in New South Wales were Scots born.

My Taylor 5th great grandparents were the first of my ancestors to come to Australia. In the history of European colonisation this was early: Australia had been colonised by white settlers for only 35 years. It was still a wild place. The Taylors were attacked by bushrangers, and one of their sons was killed by Aborigines. They prospered, however, despite the hardships and their descendants continued on the land, breeding sheep at Valleyfield until 2005, when the property, in the Taylor family  for 182 years, was sold out of the family.

I am descended from the Taylors through:

David Hawkins and his family lived in New South Wales. Jeanie Hughes lived in Victoria. I do not know whether my grandfather Geoff ever met his second cousin Vida.

In 1974 Vida Clift compiled a family history, which she called “Pink Hats on Gentle Ladies”. Copies of the manuscript were deposited in the State Library of New South Wales and State Library Victoria.

In the Introduction she wrote:

We have been in correspondence over the last five years.

Daniel has now produced a second edition of his mother’s book, with corrections and additions. A digital copy is being made available on this website.

The Taylor family’s arrival in Hobart on the Princess Charlotte on Sunday 12 January 1823 was reported in the Sydney Gazette. George Taylor’s son, Robert, wrote a diary about their four-month voyage, mostly concerned with the weather. (Helen Hudson, a Taylor family descendant, covers the Taylor’s voyage in her family history book Cherry Stones, basing her account on Robert’s diary.)

George Taylor received a grant of land about 30 miles south of Launceston on the Macquarie River. He named his property ‘Valley-Field’. Three of his sons, George, David, and Robert, received grants of land nearby.

In January 1923 and January 1973 there were large family reunions to celebrate the anniversary of the arrival of the Taylor family in Australia.

After 182 years in the Taylor family the Valleyfield property was sold in 2005. 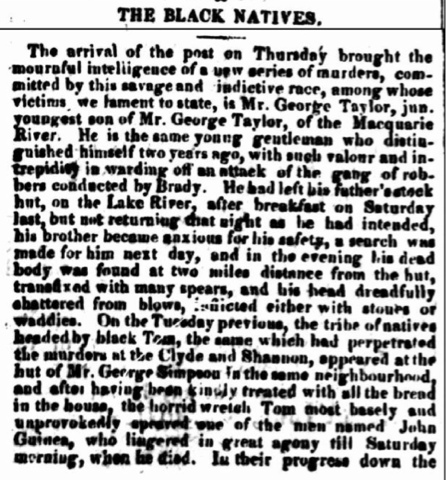 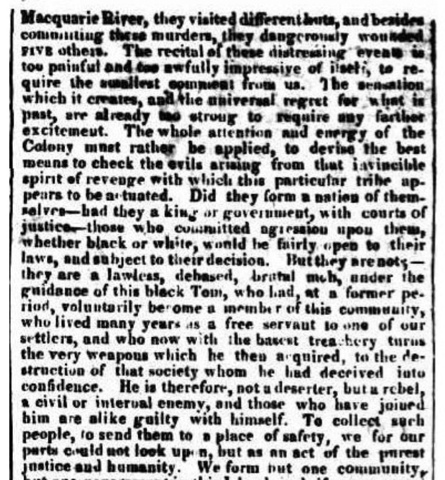 A hundred years after the arrival of the Taylor family in Australia, there was a feature on the family history in the Launceston Examiner.  George’s death and burial were remembered.