Walter Wilkes Plaisted (1836 – 1871), my 3rd great grand uncle, died of phthisis (tuberculosis) on board the SS Geelong during the passage from Singapore to Melbourne. His probate file, held by the Public Records Office of Victoria, includes an inventory of his effects, a fascinating insight into the possessions of a traveller of 1871.

Walter was the son of John Plaisted (1800 – 1858) and  Ann nee Green (1801 – 1882).  He was the fifth of eight children. Walter’s father, John, also died of tuberculosis and in fact the family quite possibly emigrated to Australia for the sake of John Plaisted’s health.

The Plaisted family arrived in Adelaide on the Rajah in April 1850.  Walter was then fourteen years old.  In 1856, aged 19,  he was witness in a court case about a forged check. He was a clerk of the South Australian Banking Company.  According to his father’s death certificate, John Plaisted had moved to Melbourne five years before his death, about 1853. Walter had obviously stayed in Adelaide, at least until 1856, after his parents moved to Victoria.

At the time of his death Walter was unmarried. He had made a will and left his possessions to be divided between his five living siblings.  At probate he was declared to be a gentleman usually residing at Gipps Street, Richmond. Walter’s property amounted to less than forty pounds. His brother Thomas was sworn to administer the estate. 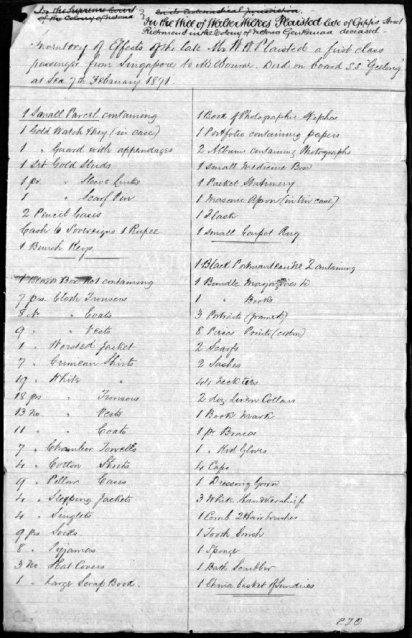 Inventory of effects of the late W W Plaisted a first class passenger from Singapore to Melbourne. Died on board S. S. ‘Geelong’ at sea 7th February 1871.

Yesterday (13 November 2013)  I attended the Victorian Archives Centre Stakeholder meeting on behalf of the Australasian Association of Genealogists and Record Agents (AAGRA).

Some exciting developments were shared with us.
By the end of this month a new probate index will be launched covering 1841-2007.

An agreement has been signed with FamilySearch to digitise wills and probate records from 1926 – 1937 extending the digitisation of those records which is currently up to 1925.

An agreement with another company is close to being finalised to digitise all the current microform holdings that have been produced by the Public Record Office. And further discussions with others are being held around additional digitisation projects.  Accessibility of frequently used items of the collection looks to be taking a great leap forward!

There was a presentation on online transformation and redevelopment of the website of the Public Record Office (PROV). Building and delivery of the website will occur up until 2015.  The current disparate components of the website:

will be integrated. Website standards, including accessibilty standards, will be incorporated.

A beta site may be available this time next year.  It will run in parallel with the existing website while any issues are sorted out.

On 1 February moved this post across from my other blogging site (A Family Historian from Ballarat) as I have decided to have only one blog.