From 1600 to 1700 London’s population trebled, from 200,000 to 585,000, outstripping the supply of what was then almost universally held to be an essential element of the city’s infrastructure, enough churches to accommodate worshippers and would-be worshippers, in particular, those of the Established Church of England.

Early in the next century, in March 1711, the House of Commons considered a report on the estimated population of the London suburbs and the churches available for worship. In the most populous parishes, there was a total of just forty-six churches and chapels for a population of over half a million. It was estimated that only one person in three could find a place in the pews of the Church of England.

On 1 May 1711 the House of Commons resolved “That a Supply be granted to her Majesty for the Build of fifty new Churches, and for purchasing Sites of Churches and Church-Yards, or Burial-Places, and also Houses for the Habitations of the Ministers of the said Churches, in or about the Cities of London and Westminster, or the Suburbs thereof, and for making such Chapels as are already built and capable thereof, Parish-Churches; and also for finishing the Repairs of the Collegiate-Church of St. Peter’s Westminster, and the Chapels of the same.” This was followed up by legislation in 1712 “An Act for granting to her Majesty several Duties upon Coals, for building fifty new Churches, &c.” A Commission was established to oversee the building of the churches.

Building fifty new churches would ease the pressure for places where members of the Church of England could gather to worship and, it was hoped, potential Dissenters would have a reduced incentive to separate from the Established Church. (My Plaisted forebears became Dissenters about this time.)

One of the new churches was St George’s Hanover Square. The architect was John James, a pupil of Sir Christopher Wren. James’s neoclassical design, with a portico of six Corinthian columns, set a new trend in English church architecture.

“St George’s Hanover Square,” aquatint, by T. Malton. Dated 1787. From the collection of the British Library retrieved through Wikimedia Commons.

Its location in Mayfair made St George’s Hanover Square the venue for many fashionable weddings. The first entry in the Marriage Register is dated April 30th, 1725. The most weddings in a single year was 1063, in 1816.

On 20 March 1813 my 4th great grandparents Charles Fox Champion Crespigny and Eliza Julia Trent married at St George’s Hanover Square. Charles Fox was twenty-seven. Eliza was a minor of sixteen, and her mother’s consent had to be provided. Charles’s half-brother Philip C Crespigny and Eliza’s brother John Trent were witnesses.

In 1813 weddings were not reported in the newspapers. However, in 1903 when Valerie Champion de Crespigny married Captain John Smiley at St George’s Hanover Square, her dress and the dresses of her six bridesmaids were described in detail.

The composer George Handel (1685 – 1759) was a parishioner of St George’s from the time it was first built. He was consulted on the organ installation.

It is said that St George’s has changed little since it was first built and that “a parishioner from two centuries ago, if he could return today, would not find much to startle or dismay him.”

This news item was reproduced in the Euroa Advertiser of 13 November, with the bride’s surname given correctly as Beggs.

His marriage to Sophia Beggs was Philip de Crespigny’s second, and this wedding seems a little more sedate than his first. In 1883 Philip’s first wife, Annie Frances née Chauncy, had died at the age of twenty-five, leaving him with two young boys: Philip born 1879 and Constantine Trent (then called Con) born 1882.  At the time of her death, Philip and Annie had been married for little more than five years.

In March 1889 P. C. Crespigny was manager of the South Melbourne Branch of the Bank of Victoria.  He had previously served at Queenscliff (where Annie Frances had died ) and Epsom near Bendigo (where his son Philip was born).  By August 1890 he had been promoted to Assistant Inspector of Branches for the bank, and went on to  become General Manager in 1916.

When looking at the material on Vida Goldstein yesterday, I noticed that a wedding picture was included in the collection donated by Leslie Henderson who was the young bridesmaid.  The other attendants were Miss Edith Minchin (Beaufort) and Miss M. L. Hamilton (Ballarat). Mr George Perry, of Melbourne, was best man, and Mr Balcombe Beggs and Dr. Dunhill were the groomsmen.

The book Cherry Stones by Helen Hudson includes a copy of the wedding invitation and a transcription of a long newspaper article on the wedding detailing the wedding and the presents. ( Hudson, Helen Lesley (1985). Cherry stones : adventures in genealogy of Taylor, Hutcheson, Hawkins of Scotland, Plaisted, Green, Hughes of England and Wales … who immigrated to Australia between 1822 and 1850. H.L. Hudson, [Berwick] Vic  pages 84-7) 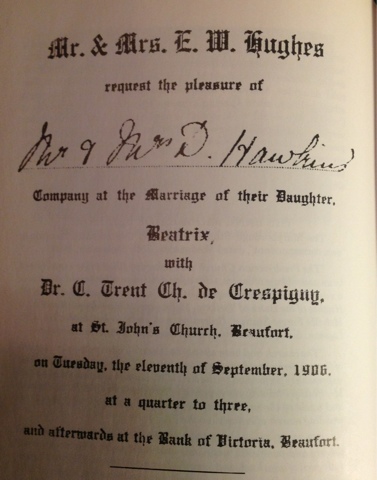 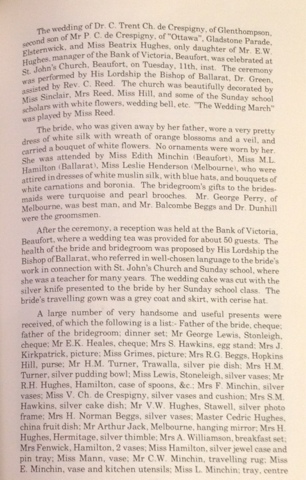 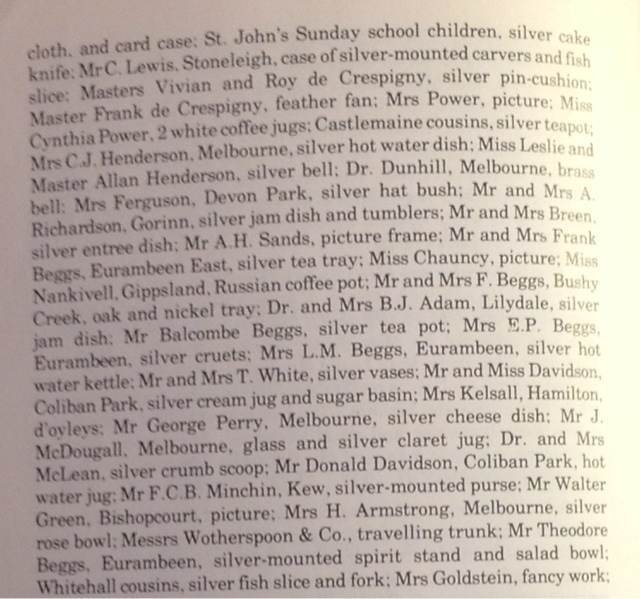 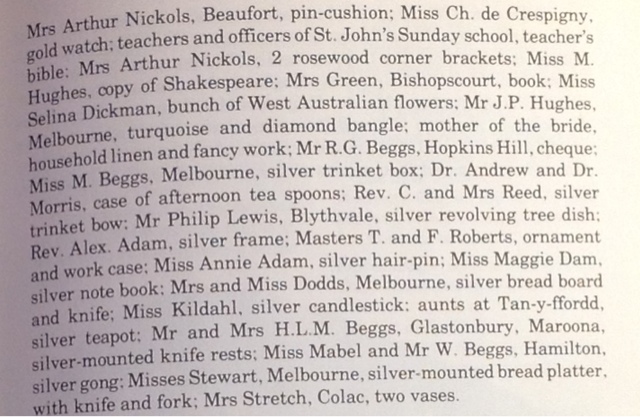 There was a good deal of commotion yesterday at St Paul’s Church amongst the fair sex, the occasion being the marriage of Mr Philip Champion Crespigny, the eldest son of Mr Crespigny, P.M., of Ararat, to the eldest daughter of Mr Chauncy, district surveyor, of Ballarat. As the bride walked up the aisle, a voluntary was played on the organ, and after the conclusion of the ceremony the Wedding March was pealed forth. The happy couple left Ballarat for Melbourne on the afternoon train. (The Ballarat Courier 26 October 1877)

The Camperdown Chronicle also reported on the riotous proceedings:

I have no idea why the wedding should have caused such a stir or whether the spectators were known to the bride and groom.  Perhaps one day I will find some letter or diary reference that might shed some clues.