For the past three years my father and I have been working on the history of the  Dana and Champion de Crespigny families in Australia.

Charlotte Frances nee Dana (1820-1904), my third great grandmother, emigrated to Australia at the time of the gold rushes with her second husband Philip Robert Champion Crespigny (1817-1889).

This year is the two-hundredth anniversary of Charlotte’s birth, an appropriate time to recall and document her life and her family.

The book is published in three versions. Below is a link to the pdf version, free to download. Hardback and paperback editions will be available soon.

A great emigration necessarily implies unhappiness of some kind or other in the country that is deserted. For few persons will leave their families, connections, friends, and native land, to seek a settlement in untried foreign climes, without some strong subsisting causes of uneasiness where they are, or the hope of some great advantages in the place to which they are going.

Thomas Robert Malthus, An Essay on the Principle of Population (1798)

Charlotte Frances Dana and her second husband Philip Robert Champion Crespigny came to Melbourne in 1852. Through their son Philip, who took the full surname of Champion de Crespigny, they were the founders of the Australian branch of the family.

In Champions from Normandy, published in 2017, Rafe de Crespigny discussed the history of the family, later known by the surname Champion de Crespigny, from the earliest records in France to their forced emigration as Huguenots in the seventeenth century and then the establishment in England during the eighteenth century. The present volume considers the experiences of the first generation in Australia. It is centred upon the life of Charlotte Frances, for she and her brother were central to the decision to emigrate, and she lived to see her first great-grandchildren in the new country and the new century.

Born in 1820, Charlotte died in 1904, and that period of eighty-four years was a time of enormous and dramatic change. She was first a subject of King George IV, former Prince Regent, and she lived through the reigns of William IV and Queen Victoria into the first years of Edward VII. Her voyage to Australia in 1851-52 lasted four months; fifty years later a steamship passage took only six weeks, less than half that time. When she arrived in Victoria, travel was by horse and cart, often no faster than seven miles a day; she would later take a train from the goldfields town of Beaufort and reach Melbourne in a matter of hours; while at the time of her death the Wright brothers in the United States were making their first powered flights at Kitty Hawk.

So it was a time of progress, but it was also an age of uncertainty. Health and medicine were both erratic, and diseases which are now quite easily treated were dangerous and could be fatal. Infant or child mortality was very high – to such a degree that many children were baptised with the name of an older sibling who had gone before them: Charlotte had two brothers christened Francis Richard Benjamin, three called Douglas and two more named William. And even those who grew to maturity could be crippled or killed by accident or sickness: one brother died in his thirties and another at the age of just forty; two young nephews died of scarlet fever and one of tetanus; and Charlotte’s son Constantine Trent Champion Crespigny and her sister-in-law Sophia nee Walsh both died of tuberculosis.

Such dangers applied still more to women of the time. Childbirth always carried a risk and stillbirth was by no means uncommon, while the absence of any practical means of contraception meant that pregnancy was often frequent: Charlotte had seven children, but she had twelve full and half-siblings, both her father and her mother had twelve brothers and sisters, and her mother’s father had sired ten more on another wife. Similarly, in her first marriage she experienced three pregnancies in three years, with one daughter who would live to maturity, a son who died in his very first year, and a third child which was still-born. With the vagaries of midwifery and the chances of infection, many women were weakened or simply worn out by such frequent fertility.

Apart from these physical matters, social and financial life could likewise be a question of fortune, good or ill. Charlotte’s family could fairly be described as gentlefolk: her grand-mother was the daughter of a Scottish baron; her grandfather came from a notable back-ground in the American colonies; one of her uncles was a general in the British army and owned a landed estate; two of her aunts married wealthy men; and in 1839 Charlotte herself was married to a prosperous solicitor in Gloucestershire.

Apparent security, however, could change very quickly. Soon after Charlotte’s wedding her father’s printing business failed, he was sent to prison for debt and was stripped of all property. The last years of his life were survived on a small pension in the home of his daughter and son-in-law.

Bankruptcy and indebtedness were indeed a constant threat: if a bank failed, its notes were worthless – and much of the currency in circulation was issued by private banks; the system of limited liability was not in common use, so the failure of a business could bring ruin to its owner; and a batch of unpaid bills could bring a cascade of misfortune.

The position was even more precarious for women. Until quite recent times, a married woman was identified with her husband, with no separate legal or financial existence, while unmarried women had limited opportunities for a meaningful career which might enable them to support themselves. Married, unmarried or widowed, most women were obliged to rely upon their families. When Charlotte Frances’ husband Philip Robert was taken ill, he was entitled to a pension, but after his death there was no further official or government support; and her unmarried daughters Ada and Viola were equally dependent upon the goodwill of their more prosperous kinfolk.

One question may always be raised of any Australian whose family arrived within the last 250 years: “Why did they come?” For convicts, it was compulsory; very often, notably in the years of gold rush, it was the hope of sudden fortune. For Charlotte’s brother Henry Edmund Dana, educated as a gentleman but with few opportunities at home, it was the hope of better prospects than could be expected in England – and for Charlotte and her second husband Philip Robert Champion Crespigny it was a means to escape the social and financial embarrassment of a dramatic and well-publicised divorce.

Regardless of such an erratic beginning, however, that second marriage was affectionate and companionable, and even after Philip Robert’s sad slow death Charlotte was able to enjoy the support of her daughters and the successes of her son Philip and her grandchildren. In a letter of 1858, her father-in-law wrote in praise of her patience and courage, and of her determination to make the best of everything.

On 20 July 1929 the West Australian, a Perth newspaper, published an article about Susan Augusta Chauncy née Mitchell (1828-1867), based on a memoir written in 1873 by her husband, Philip Chauncy.

I have a copy of the memoir, which was republished in 1976.

Philip and Susan Chauncy were my 3rd great grandparents.

I have visited their grave in St Kilda cemetery. The inscription is now very faint but I transcribed it as follows:

Sacred to the memory of

The epitaph is from Revelation 2:10.

James  Cross (1828 – 1882) and his wife Ellen Cross née Murray (1837 – 1901), the great great grandparents of my husband Greg, moved to Carngham between the births of their first and second children. Frederick James Cross, their oldest son, was born on 1 April 1857 at Green Hills near Buninyong. Their daughter Ellen was born on 27 May 1859 at Carngham. James and Ellen had nine more children all born at Carngham. James Cross died at Carngham in 1882. Ellen Cross died in Ballarat in 1901.

From Lost and almost forgotten towns of Colonial Victoria : a comprehensive analysis of Census results for Victoria, 1841-1901 by Angus B.Watson.

Carngham, 27 km west of Ballarat, about 30 km from Buninyong, and 4 km north of Snake Valley, was a mining township, surveyed and proclaimed in 1855. State School number 146 operated at Carngham from 1856 until 1911.

Snake Valley was not proclaimed a township. It was a mining centre, surveyed as a hamlet. State School number 574, which began in 1854, is now part of the Woady Yaloak school.

Today Carngham amounts to little more than a few houses where the Snake Valley – Trawalla road crosses the route from Ballarat to Beaufort.  Snake Valley is still the larger settlement. Overlooking Carngham is a cemetery where James Cross, his wife Ellen and some of his children and their families are buried.

The name Carngham is said to derive from the Wathawurrung people’s word for house or hut.  In 1838 James and Thomas Baillie squatted there and adopted the Aboriginal place name for their property. The local clan was the Karrungum baluk or Carringum balug. Clark, Ian, and Toby Heydon. “Historical Information – Carngham.” VICNAMES. Victorian Aboriginal Corporation for Languages (State Government of Victoria), 2011. Web. 01 Oct. 2013. <http://services.land.vic.gov.au/vicnames/historicalInformation.html?method=edit&id=3226>.

Snake Valley is said to have got its name when a gold miner found snakes in a shaft he was sinking. Clark, Ian, and Toby Heydon. “Historical Information – Snake Valley.” VICNAMES. Victorian Aboriginal Corporation for Languages (State Government of Victoria), 2011. Web. 01 Oct. 2013. <http://services.land.vic.gov.au/vicnames/historicalInformation.html?method=edit&id=5118>.In turn citing Porteous in Smyth 1878b: 179. 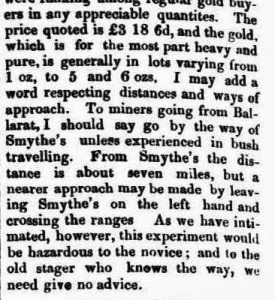