When he died on 11 June 1911, in Parkes, New South Wales, John Way was buried in  Parkes cemetery with his wife and son. His gravestone noted the death of his grandson Leslie Leister, killed World War 1. 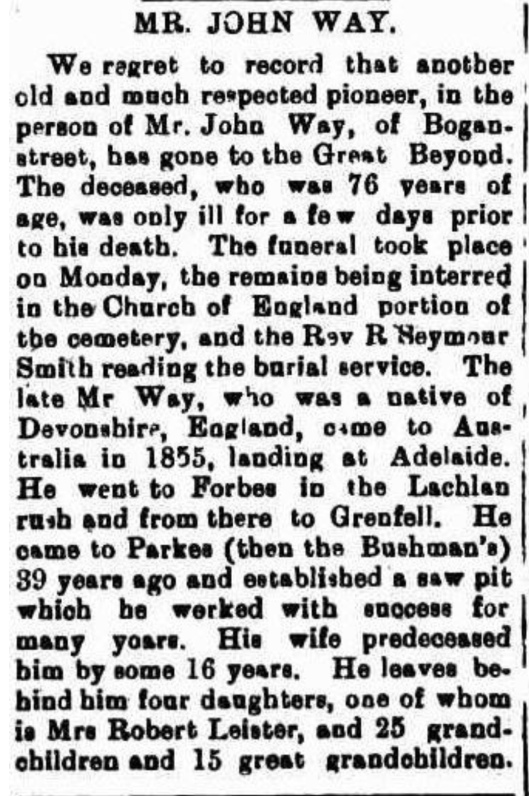 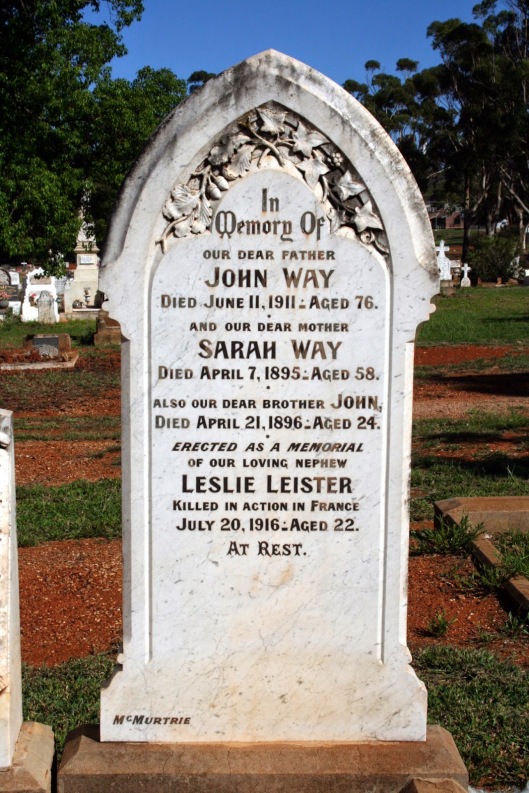 Sadly, the headstone of John Way’s grave was broken in two by vandals in 2010 (after this photo was taken).

Because the marble is too soft and hollow to drill and pin, it could not be completely restored.

As a community service, J.T. Cock & Sons, a Parkes monumental masonry firm, repaired the headstone as best they could, picking it up off the ground and laying it flat. Unfortunately, some of the lead lettering, fractured in the damage, has come away, making the inscription harder to read. 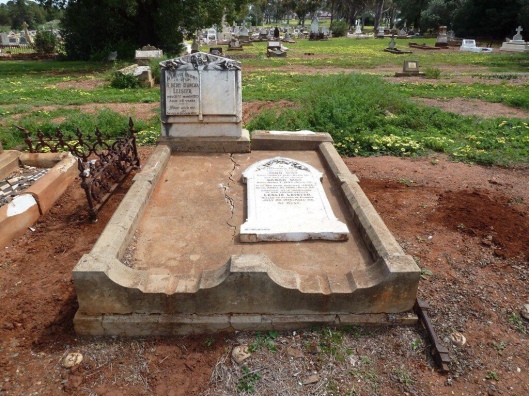 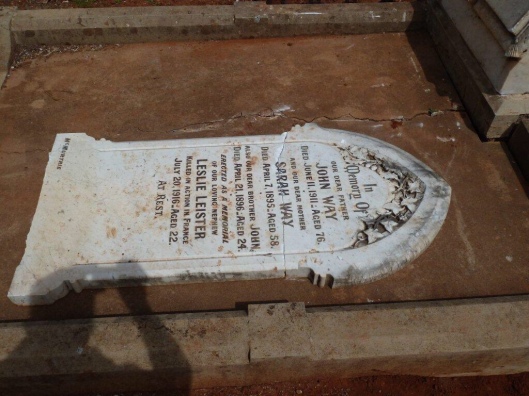 On 21 April 1896, John Way, 24 years old, died of typhoid, perforated bowel, and peritonitis after an illness of three weeks. John Way, from Parkes in central New South Wales, was a miner like his father, also called John.

Typhoid is a bacterial disease caused by eating food or drinking water contaminated by human faeces. Its spread is prevented by efficient sanitation and careful public hygiene.

John Way’s death was reported in the Evening News, a Sydney newspaper, on the next day:

Death from Typhoid.
PARKES, Wednesday.— Another death from typhoid has occurred a young man named John Way being the victim.

I came across this article by accident while browsing the National Library of Australia’s ‘Trove’ collection of digitised newspapers. I broadened my search to look for typhoid in Parkes in April 1896.

On 1 April, the Queanbeyan Age reported that there were 21 cases of typhoid in Parkes hospital. On 17 April the Sydney Evening News reported that since the beginning of the year there had been 59 deaths in Parkes, 19 of these due to typhoid. The source of the outbreak was yet to be traced. The mayor was taking steps to have cesspits filled in and the pan system generally adopted. On 24 April the Albury Banner and Wodonga Express reported there were over 100 typhoid cases in Parkes and district under medical treatment.

Towards the end of May a report on the epidemic was tabled in Parliament.The Riverine Grazier summarised the report on 23 June:

In 1895,according to the cemetery register, there were 22 burials in Parkes cemetery. This in
cluded seven people burnt to death in a fire in April, mainly members of a family called Quinn. Twenty people were buried in the cemetery in 1896 but ten of the burials were in April. The cemetery register does not appear to include all those affected by the typhoid epidemic but the disproportion of the deaths in April 1896 gives some idea of the tragedy.

In May 1879, John’s sister Harriet Way, nine years  old, died in Parkes of typhoid after an illness of three weeks.

In my family tree, Eleanor Mary Niall (1858-1891), my first cousin four times removed, died of typhoid in Adelaide in November 1891.  My great great grand uncle Daniel Budge (1842-1895) died of typhoid in Coolgardie, Western Australia, in January 1895. One of his obituaries mentions that typhoid was firmly established at Coolgardie.

It is estimated that worldwide today there are 21 million cases of typhoid and 200,000 deaths each year. “Typhoid Fever.” National Center for Emerging and Zoonotic Infectious Diseases. Centers for Disease Control and Prevention, 14 May 2013. Web. 30 June 2014. <http://www.cdc.gov/nczved/divisions/dfbmd/diseases/typhoid_fever/technical.html>. 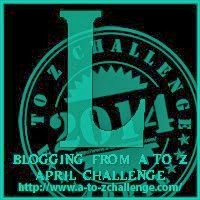 I have decided to continue the story of Leslie Leister by writing about his aunt, Eliza, who became his foster mother.

Eliza Way was born 22 August 1865 on Brittons Dam Station, Kitticara, near Murrumburrah, New South Wales. Her father John Way (1835-1911) was a shepherd. She is named Elizabeth on her birth certificate.

Eliza was the sixth child of John and Sarah (1837-1895). The birth certificate stated three males living and two children deceased. There was a mistake on the certificate, Eliza in fact had three older sisters, and a boy and a girl had died before she was born. There were also four younger siblings.

From the birthplaces of her siblings we can see that the Way family had moved to Grenfell by 1868, when Emily was born. John’s occupation was then as a sawyer. In 1870 Harriet was also born in Grenfell, “near Reece’s foundry” (‘The European Iron Foundry’). John was still a sawyer. In 1872 his son John was also born at Grenfell. In 1874 when Martha was born in Parkes, John Way’s occupation was as a miner.

By the 1890s, and perhaps earlier, the Way family were living at Bogan Street Parkes.

Eliza’s sister, Sarah Jane, married Robert Whiteman, a miner on 12 July 1882 at Parkes. They had two children: Robert Henry, born 1883, and Mary Ann, born 19 August 1884. Six months before Mary Ann was born, Sarah Jane’s husband Robert  died of pneumonia after an illness of four days. Sarah Jane probably relied on her parents and sisters for help in bringing up her two infant children. Sarah Jane remarried on 26 September 1894 in Melbourne to John Young, a miner, who had spent some time in New South Wales, presumably including a period in Parkes.

On 13 August 1894, just before her second marriage, Sarah Jane gave birth to a boy, Jack Walsh Whiteman. The father was not named on the birth certificate. The birth was registered on 21 September, with Sarah Jane the informant. Her mother had been a witness, assisting at the birth. There was no doctor and seems to have been no other nurse or midwife.

It appears that Sarah Jane left her baby Jack behind with her mother in Parkes when she went to Melbourne to marry John Young.

Sarah Way, the mother of Sarah Jane and Eliza, died on 7 April 1895 of what is described on the death certificate as biliary colic and an impacted gallstone. The length of her illness was described on her death certificate as chronic. Four of Sarah’s daughters were married: Louisa in 1873, Mary Ann in 1883, Sarah Jane in 1894 and Emily in 1892. Four children had died. Eliza and John junior were unmarried and probably still living with their parents. It would seem to have become Eliza’s responsibility to care for the grandchild Jack.

On 1 July 1896 Eliza married Robert Watson Duncan Leister at her father’s residence in Parkes. The witnesses were Hugh Leister and Caroline Harrison.

Robert Leister was 25 years old, a blacksmith, born at Maryborough, Victoria. His father was a carpenter. Eliza was 29 and her occupation was given as “living with her father”.

Robert and Eliza continued to live with Eliza’s father John at Bogan Street, Parkes. When John died in 1911, Robert Leister is given as the informant on his death certificate. John’s will left his estate to his daughters Eliza and Louisa and appointed Eliza as his executrix.

Robert Duncan Leister died on 31 March 1925 at Bogan Street, Parkes. He was 56 years old. His occupation was upholsterer. He had been ill for several years with chronic nephritis (inflammation of the kidneys) and for 24 hours with uraemia (the illness accompanying kidney failure). He had been 26 years in Victoria and 30 years in New South Wales; he had arrived in New South Wales about a year before he married Eliza. Robert and Eliza had no children of their own.

In 1929, William Charles Waine, husband of Eliza’s sister Mary Ann, died in Orange. By 1930 according to the electoral rolls, Eliza was living at Byng Street, Orange. She had no family left in Parkes. Perhaps she was helping her sister or perhaps they enjoyed each other’s company.

Eliza died after a car accident in February 1940. She was hit by a car when walking to church. 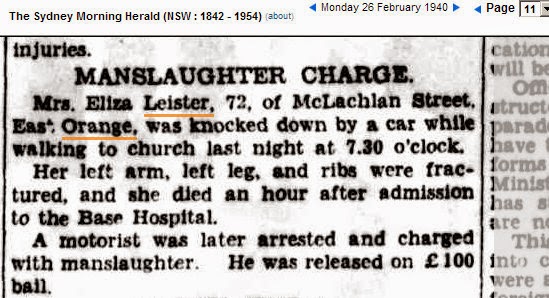 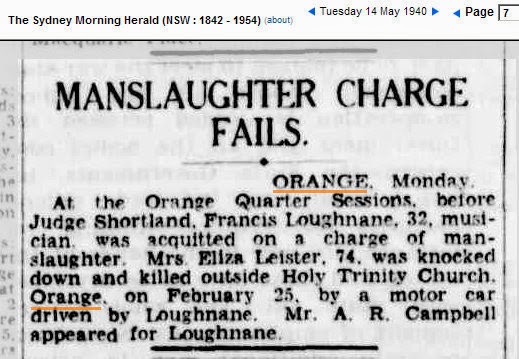 Eliza is buried at Orange. The grave at Parkes beside her husband remained empty. Parkes is 100km from Orange and there were no other members of the family living in Parkes at the time of Eliza’s death.