When we stop over in Singapore on our way to London one of the places we will be visiting is the Cavenagh Bridge, named in honour of my 3rd great uncle Orfeur Cavenagh (1820 – 1891), Governor of the Straits Settlements from 1859 to 1867.

Orfeur Cavenagh trained at Addiscombe, the East India Company Military Seminary in Surrey near London, and passed his exams in 1837. He served in India and was wounded severely twice. 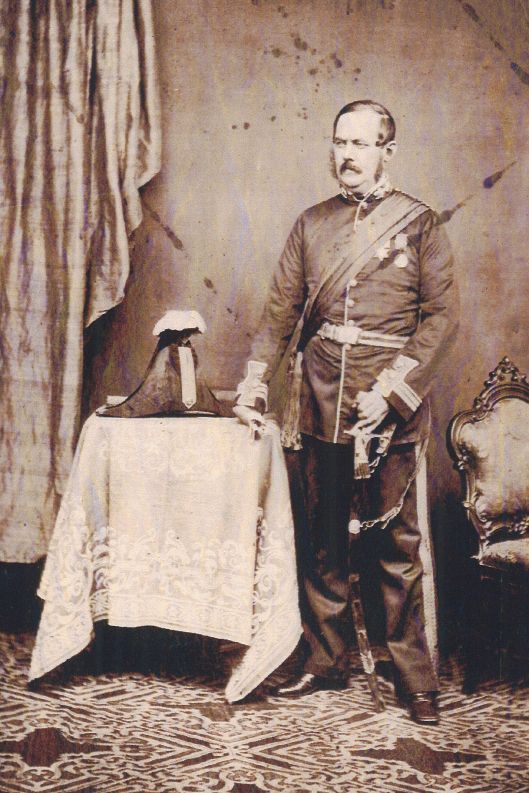 In recognition of his services during the 1857 Indian Mutiny,  Orfeur Cavenagh was offered the post of Governor of the Straits Settlements (Singapore, Malaya and Penang): he governed there from 1859 to 1867. In his book, Reminiscences of an Indian Official, Sir Orfeur, summed up the changes that had taken place under his Governorship of
the Straits Settlements:

“When I assumed charge of the Government, the Settlement contained but few public buildings, lines of communication were in many parts much needed, many of its official establishments were weak, and its financial position was unsatisfactory. During my tenure of office, extensive public works of every description were carried out, every Department of the Public Service was placed on an efficient basis, and I left the Straits a most flourishing colony with a revenue amply sufficient to meet all legitimate expenditure.” 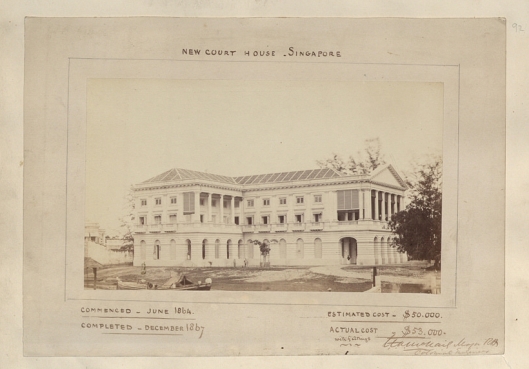 Cavenagh is remembered as a hardworking Governor and apparently, in general, the verdict of modern historians on Cavenagh’s performance is favourable. However, in 1862 he embarrassed Anglo-Siamese relations with an un-authorised bombardment of Kuala Trengganu. It was possibly this incident which meant his career languished after the Governorship.

In 1881 Orfeur Cavenagh was appointed KCSI, Knight-Commander of the Order of the Star of India.

A plaque at each end of the bridge includes the Cavenagh coat of arms and the inscription honouring Orfeur Cavenagh.

The wheatsheaf [heraldic garb] is the standard crest of the Cavenaghs.

The left hand side of the shield is the generic Cavenagh arms, probably in red [gules] on white/silver [argent].

My grandmother Kathleen brought a small dish back from Ireland with the Cavenagh arms on it. This shows two crescents but our family uses three; for example, the arms used by Matthew Cavenagh (1740 – 1819) were “Azure, a lion passant argent, armed and langued gules, between three crescents of the second.” Matthew Cavenagh was the grandfather of Orfeur (and my fourth great grandfather). 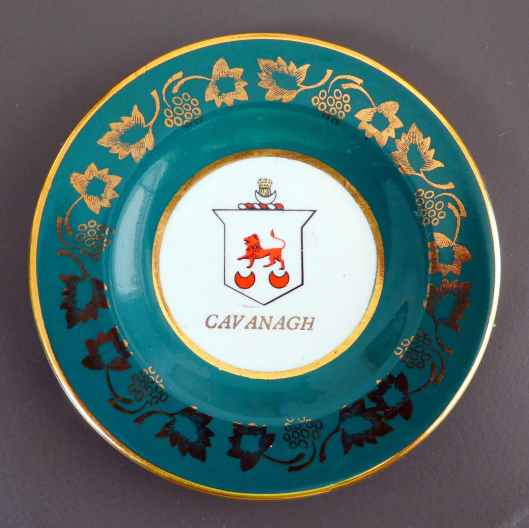 A souvenir from Ireland

The left hand side of a shield is the more important/honoured/valuable – because it is the right hand side of the person wearing/carrying it. That the Cavenagh arms appear on that side makes sense.

The right hand side of this shield is a chevron with three “covered cups” (goblets with lids).

I was puzzled by how this connected to Orfeur Cavenagh.

With the help of some cousins I have learned that these arms are associated with the Odiarne family. Orfeur Cavenagh’s mother, Anne Cavenagh nee Coates, was the great great grand daughter of Thomas Odiarne (1639 – 1704). Both her father and grandfather were named Odiarne Coates. The Odiarne arms appeared as one of the 856 shields on the ceiling of the cloisters of Canterbury Cathedral, but it appears they may not have survived to be among the shields there today.

Orfeur Cavenagh’s father, James Gordon Cavenagh, used these arms for his bookplate, and Orfeur Cavenagh seems to have adopted his father’s design. Neither of them registered the arms with the College of Arms.

the bookplate of James Gordon Cavenagh