My third great grandmother Charlotte Frances Champion Crespigny née Dana, lived from 1820 to 1904, a period of great change in the political status of women.

When the list of voters was compiled, Charlotte was recorded on the Electoral Roll for the polling place of Beaufort, Division of Grampians, State of Victoria, as Charlotte Champion, living at Eurambeen, occupation home duties. (Eurambeen was about 11 kilometers west of Beaufort.) Also on the Roll were her daughters Viola Julia Champion and Helen Rosalie Beggs née Champion Crespigny, both also living at Eurambeen with the occupation of home duties. 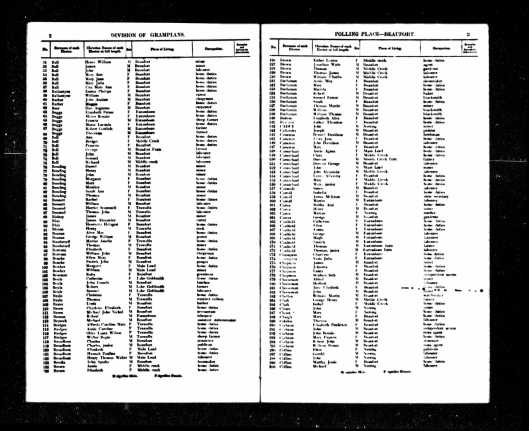 The Commonwealth of Australia 1903 Electoral Roll for the polling place of Beaufort, Division of Grampians, State of Victoria, pages 2 and 3 showing the surnames of Beggs and Champion. Image retrieved from ancestry.com

Oddly, it appears that Charlotte and Viola were recorded twice. There are entries  on page 4 of the roll for Crespigny Frances and Crespigny Constantia, also both of Eurambeen; Frances was Charlotte’s middle name and Constantia was Viola’s third given name. When names were collected for the roll the surname Champion Crespigny went over two lines and so did their given names. There was not enough space on the form: the result was two Roll entries each.

The Commonwealth of Australia 1903 Electoral Roll for the polling place of Beaufort, Division of Grampians, State of Victoria, pages 4 and 5 showing the surname Crespigny. Image retrieved from ancestry.com

On the 1909 roll Viola’s surname was changed to Crespigny, with her full name recorded as Crespigny, Viola Julia Con. C. At that time she living at St Marnocks with her sister and brother-in-law.

A Victorian state election was held in October 1902 but for this women were as yet not enfranchised. The next year, however, there was a Federal election on 16 December and Charlotte and her daughters were eligible to vote.

The Federal Division of Grampians was retained by the sitting member Thomas Skene (1845 – 1910) of the Free Trade Party, an anti-socialist party which advocated the abolition of tariffs and other restrictions on international trade.

Charlotte and her daughters, from a prosperous family of graziers, probably supported Skene, a pastoralist. Voting was not compulsory, however, and though she was entitled to vote, Charlotte was unwell and probably unable to travel to the polling station at Beaufort to cast her vote.

There was provision for postal voting but it was very complicated, with specific witnesses required.

All in all, the story of my great grandmother’s enfranchisement is not especially remarkable. She was not a fire-breathing suffragist, but an ordinary person who, late in life, accepted a new political privilege with no great fuss.

In Australia, a horse’s birthday is the first day of August. Mating usually happens early in the previous spring, with foaling eleven or twelve months later. Having a common birthday means that horses of a similar age can be entered together in racing events.

The Australasian of 19 September 1891 reported that:

Mr. Francis Beggs, Eurambeen, Beaufort, requests permission to supplement our correspondent’s report of the Ararat show by stating that his colt Saint Marnocks, by Macgregor-Nightlight, took first prize at Ararat in the class for two and three year old thoroughbreds, and also Messrs. Briscoe’s special prize for the best thoroughbred stallion in the yard. In the light-weight hack class his horse Malahide, by Macgregor, took first prize.

In March 1892 St Marnocks was reported as being 3 years old when he came third in the one mile Trial Stakes at the Buangor Races on 15 March. His sibling Elphinstone, also by Macgregor-Nightlight, came first. Later in the day St Marnocks came third again in the one mile Welter Handicap. The newspapers over the next two decades have many report of St Marnocks.

In the annual races of the Beaufort Jockey Club on New Year’s Day 1894 St Marnocks won the Handicap race by a neck. In 1899 he won the three quarters of a mile Flying Handicap at the Beaufort races. The Ballarat Star reported that the win was “A gift to St Marnocks, who won in the last few strides by two lengths in 1 min. 35 sec.”

In the next decade Aloha, the son of St Marnocks, began to feature in the turf reports. St Marnocks again won first prize for blood entire and also Champion at the 1902 Beaufort show. St Marnocks sired many progeny, for example in 1908 10 horses all sired by St Marnocks were offered for sale by Mr Francis Beggs of Eurambeen.

On 13 August 1908 Melbourne Punch reported “Mr. and Mrs. Frank Beggs, who for many years have lived at Eurambeen East, are now settled in their new home at St. Marnocks, Mr. Beggs having purchased part of the Stoneleigh Estate in the Beaufort District.” The new property was named after their successful horse.

In 1927 an article in the Australasian reported that Francis Beggs was responsible for building the homestead and outbuildings. He also established plantations to provide shelter for the paddocks and a created a garden surrounded by acacias. After the death of Frank Beggs in 1921 the property was taken over by his nephew Theodore George Beggs (1903 – 1936). 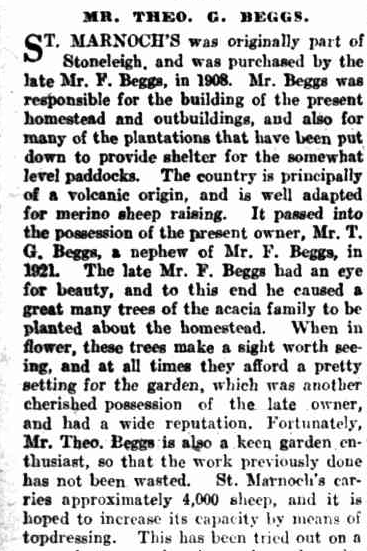 In 1930 the homestead was photographed as part of a series of pastoral homes and again in 1987, by that time somewhat run down. 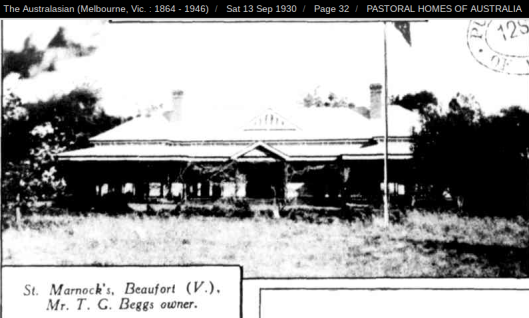 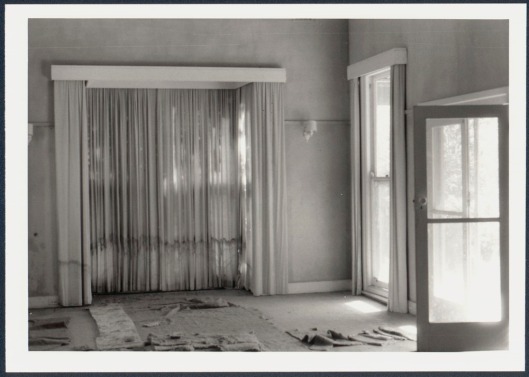 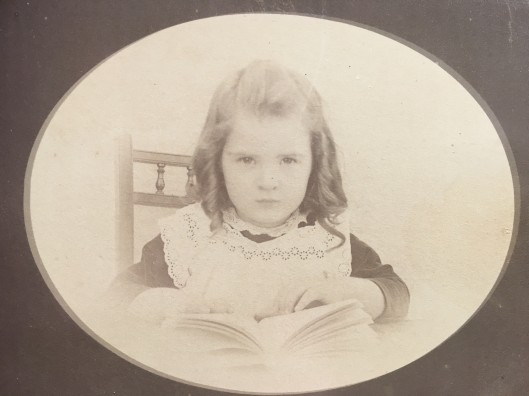 As a girl Beatrix studied music and in 1902 did well in her examinations, but beyond this I know very little about her when she was young.

Monday
We had a very pleasant evening, both afternoon tea and a magnificent iced cake with almonds all over it, and a lovely tea, 14 sat down to it. Con’s ducks were most delicious, and a magnificent ham and meat pies, sweets of all sorts. I wished so much you could have had some of the good things and Loo would have enjoyed the ducks so much. Con and Rose were wishing he was there and you too. I was thinking all the time what a dull old Sunday you would all be having, without any servant.
After Tea, Frank drove me with Rose and Mr. Minchin to the other house. All the young people walked in the lovely moonlight. They stayed out playing games till nearly 10 when Frank came in and read prayers. After that, supper and home, Mr Hughes and all the whole crowd walking home Anna and Ethel, [?] coming as well, having a little more refreshment. They did not go till after the Hughes and Minchins drove home, near 12, and then Con and Jack walked back with them enjoying the moonlight, no one wore any hats or bonnets, and all the white dresses looked so pretty. Trixey Hughes and Edith Minchin gave Rose pretty little presents.

Who was who at the Eurambeen party.

Beatrix and Trent had four children.

The eldest, Richard Geoffrey, known as Geoff, was born in Glenthompson in 1907.

Geoff de Crespigny with his mother Beatrix about 1912

Their second child, Nancy, was born in Adelaide in 1910. Constantine Trent was Superintendent at the Adelaide Hospital from 1909.

In World War 1 Constantine Trent Champion de Crespigny, who reached the rank of Colonel, had a distinguished career commanding military hospitals. On the home front Beatrix contributed greatly to fundraising efforts for the soldiers at the front.

In 1919 Beatrix had two more children, twins. Sadly, one of these, Adrian, suffered a brain injury at birth, and spent most of his life in care. The other child was a girl, Margaret. 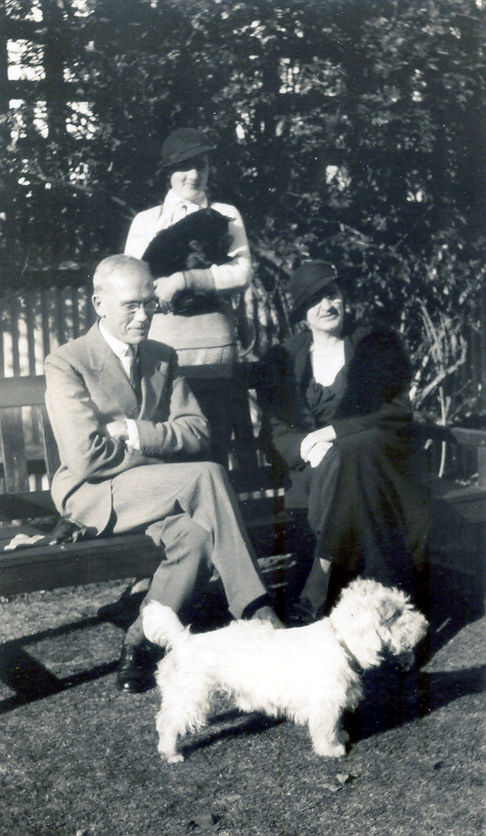 Beatrix died in 1943 at the age of 59. Her obituary made mention of her charitable work, drawing particular attention to her contribution to child welfare which included many  year’s service to the Mothers’ and Babies’ Health  Association in Adelaide.

The canaries were raffled to raise funds for the war effort. The Beaufort Girls’ Patriotic Club forwarded comforts parcels, including parcels of socks, to 130 soldiers from the district.

Later in 1917 Miss de Crespigny donated another pair of canaries to the Beaufort, Waterloo, and District 15th Infantry Brigade Comforts Depot. Mrs E.W. Hughes, wife if the bank manager (my great great grandmother) also made a donation of socks and tobacco.

Breeding canaries was a pastime of my third great grandmother Charlotte Frances de Crespigny née Dana (1820-1904). In 1898, in a letter from Eurambeen to her daughter Ada, Charlotte wrote:

I have 4 beautiful young canaries and the other little hen sitting. Rose has 10 young ones I have to look after.

Would you very much mind putting my big canary cage under the tap and clean it for the poor little birds when I come. They will be so crowded I shall have to put them in a bigger cage till I sell them.

I believe Charlotte was at Eurambeen and writing to Ada in Melbourne. It seems from the letters that Viola also lived at Eurambeen with her sister Rose and mother and brother-in-law.

On the 1914 electoral roll Viola is listed as living at St Marnock’s, Beaufort. At the same property were Francis and Helen Rosalie Beggs. On the 1903 roll Francis and Rose Beggs and Viola and her mother were living at Eurambeen near Beaufort.

Viola had four nephews who served in the war:

Constantine Trent married Beatrix Hughes from Beaufort. Beatrix had two brothers who served in the war:
Beatrix’s third brother, Reginald Hughes (1886-1971) was rejected for enlistment on medical grounds.
Besides these close relatives there were almost certainly many other relatives and friends who served.
Follow Anne's Family History on WordPress.com