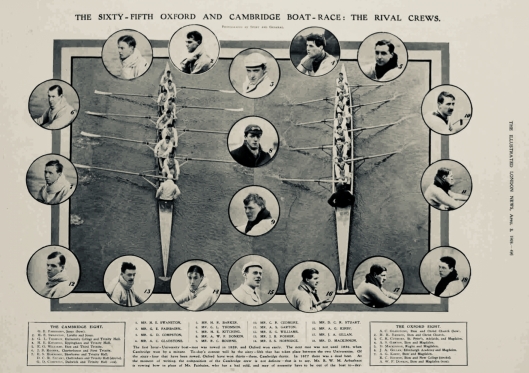 some times you just need to be alone. You need space : space to think, space to breathe, space to contemplate your place in the great scheme of things. What better way to find such space than to get into a boat and row out into the middle of the sea. This is what this young lady did back in 1900 somewhere near Estonia. (http://sepiasaturday.blogspot.com.au/2013/09/sepia-saturday-193-7-september-2013.html )

I do have a picture of my daughter rowing our dinghy at Batemans Bay several years ago.

The mood somewhat less reflective than the young girl in Estonia a hundred years earlier.

However the blogging prompt actually reminded me of my grandfather, Richard Geoffrey Champion de Crespigny (1907 – 1966). Geoff de Crespigny was a talented rower who was in the Melbourne University crew and also the crew for Trinity College while he studied medicine from 1927 -1929.

Trinity lost against Ormond College in the University boat race of April 1929. However we do have two trophy oars as mementoes of my grandfather’s rowing career; one from Trinity College and the other from Melbourne University.

The race was contested on the Lower Yarra on 1st June 1929. The six States were again represented and the race was won by Melbourne University handsomely by 3 1/2 lengths. Both races were conducted over 2 1/2 miles.