In September 1915 the journalist Keith Murdoch (1885 – 1952) wrote to Andrew Fisher  Prime Minister of Australia giving his views on the conduct of the Gallipoli campaign. Murdoch’s letter has been digitised by the National Library of Australia.

According to the Australian War Memorial the letter contained many errors, but it was seen by the Australian Prime Minister and led to the ending of the Gallipoli campaign.
My great-grandfather de Crespigny, with other field hospital doctors, was mentioned on page 21:

Without such a purification of motive as will bring youth and ability to the top, we cannot win. I could tell you of many scandals, but the instance that will best appeal to you is that of the staff ship Aragon. She is a magnificent and luxurious South American liner, anchored in Mudros harbour as a base for the Staff of the Inspector-General of Communications.

I can give you no idea of how the Australians — and the new British Officers too — loathe the Aragon. Heaven knows what she is costing, but certainly the staff lives in luxury. And nothing can exceed the rudeness of these chocolate general staff soldiers to those returning from the front. The Ship’s adjutant is the worst instance of rude and disgusting snobbishness and incapacity I have come across.

With others, plain downright incapacity is the main characteristic. I must say this of them also, that whereas at our 3rd Australian General Hospital on shore we had 134 fever cases, including typhus, with only a few mosquito nets, and no ice, and few medical comforts, the Aragon staff was wallowing in ice. Colonel Stawell — you know him as Melbourne’s leading consultant — and Sir Alex M’Cormick are not sentimentalists. Ice for the officers aboard the Aragon … none for the wounded men. But they really wept over the terrible hardships of the wounded, due to the incapacity of the Aragon. One concrete case is that of 150 wounded men landed in dead of night, with no provision and no instructions, at the hospital beach, to make their way as best they would to the hospital, which had no notice of their arrival.

Fiaschi, de Crespigny, Stawell and Kent Hughes will be able to tell you of the absolutely shocking difficulties of this hospital in the face of perpetual snubbing and bungling of the Aragon staff. Real need … the hospital at Lemnos, where nurses and medics do their best with incoming injured.

While I was at the hospital a beautiful general and his staff rode in to make an inspection. Despite their appearance as perfect specimens of the general staff, I thought, we shall now get the ice from the Aragon on to the brows of our unfortunate men. But no ice appeared next day.

The navy is very good, and sent some comforts and ice across, but for the three days before my visit this ice had gone astray before it reached the hospital.

Among the trophies, relics, and souvenirs held by the Australian War Memorial in Canberra is a large German swallow-tailed flag donated in 1922 by Major Wentworth Mainwaring.

Wentworth Rowland Cavenagh-Mainwaring (1869-1933), known in the family as Wenty, was my great-great uncle. He served in the Middle East from 1914 firstly with the 3rd Light Horse and later with the 2nd Stationary Hospital..

According to Mainwaring’s account, the flag came into his hands in August 1918, when he was briefly billeted in a Jerusalem hotel called the Hotel Fast, which had been occupied by members of the German general staff before their withdrawal to Nablus in November the year before. The story has the flag rescued from being about to be burned by Corporal Cole. Corporal Cole was probably Thomas Elgin Cole sern 8696 who served with the 2nd Australian General Hospital. It was quite a souvenir.

My grandmother, Kathleen (1908-2013), talked about Wenty’s flag once or twice and visited the War Memorial with my father and her sister to view it in the 1970s. (Kathleen’s mother was Wenty’s sister.)

The flag, large, made of wool with a painted eagle, hung in Kathleen’s parents’ house in Pennington Terrace in Adelaide for a few years until it was donated to the War Memorial.

The flag is not on permanent display, but my brother and I were recently given a private showing.

Nearly a hundred years after Wenty souvenired his enemy flag, it is still in excellent condition. 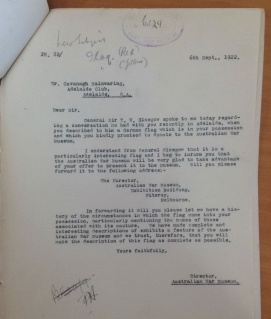 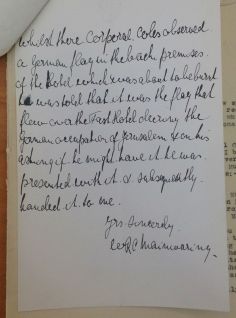 It seems unlikely that the flag was von Falkenhayn’s. The curator at the War Memorial suggests it is a German foreign office flag. So it seems that the Fast Hotel had probably housed members of the German diplomatic corps, not the military officers.

Wentworth Cavenagh_Mainwaring travelled through Jerusalem in August 191 on his way to take up a post with the 2nd A.S. Hospital.

The Fast Hotel is no longer standing. It was associated with the Australian Imperial Forces in World War 2.