Vida Goldstein (1869 – 1949) was my first cousin three times removed and stood for the Senate in 1903, 110 years ago. Although she was not elected, she was the first woman in Australia to stand for election to the Federal parliament and one of four women who were the first in the British Empire to be nominated and to stand for election to a national parliament. She was also a key campaigner for the vote for women in Victoria.  She has an entry in the Australian Dictionary of Biography and also on Trove. (Janice N. Brownfoot, ‘Goldstein, Vida Jane (1869–1949)’, Australian Dictionary of Biography, National Centre of Biography, Australian National University.  Retrieved September 10, 2013, from http://adb.anu.edu.au/biography/goldstein-vida-jane-6418/text10975) (Goldstein, Vida (1869-1949). (2008). In Trove. Retrieved September 10, 2013, from http://nla.gov.au/nla.party-599050)

Vida was a relative from my Hughes branch and I first learned of the family connection through Helen Hudson née Hughes (1915 – 2005) who enjoyed researching the family history and wrote a book, Cherry Stones, which I have found tremendously useful in following up on her research. ( Hudson, Helen Lesley (1985). Cherry stones : adventures in genealogy of Taylor, Hutcheson, Hawkins of Scotland, Plaisted, Green, Hughes of England and Wales … who immigrated to Australia between 1822 and 1850. H.L. Hudson, [Berwick] Vic )
Vida was the daughter of Isabella née Hawkins (1849 – 1916) and Jacob Goldstein (1839 – 1910). Isabella was the sister of my great great grandmother Jeanie (1862 – 1941) who married Edward Walter Hughes.
Last weekend’s election prompted me to search for mentions of Vida’s political career.  She has been the subject of several books and I have come across a memorial mentioning her name at Parliament House in Canberra.  When researching Avoca at the time of World War 1, I noted that as a candidate at that time only four people voted for her from Avoca; but then again she had not visited the town to campaign.

In 1903 her campaign for the senate received wide coverage.  Trove newspaper search has 353 items in its newspaper database for 1903.  The coverage is across Australia, not only in Victoria; newspapers as far afield as Kalgoorlie, Western Australia, Broken Hill, New South Wales, and Brisbane, Queensland reporting on her campaign.

Meetings were well attended and usually reported on at length with details of the speeches and questions to the candidate.  Here is a short report of a meeting at Echuca in northern Victoria.  It is a small town but she had an audience estimated at 600 to 700.

Vida gained more than 50,000 votes and ranked 15th out of 18 candidates for the four senate seats.

Vida spoke about the aftermath of the election:

My search on Trove found a picture of her I had not seen before. 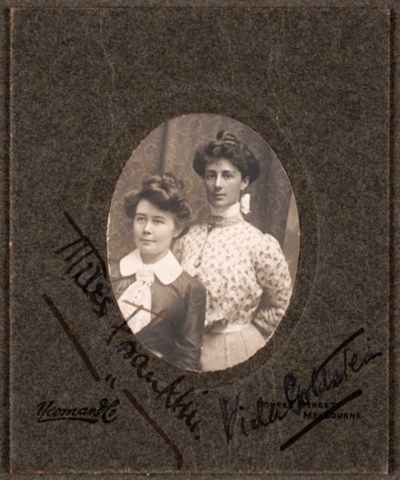 The image is from the collection of the State Library of Victoria. Their catalogue entry:
I did not previously know of any connection with Miles Franklin, an author whose works I enjoy very much and who came from areas around Canberra which I used to visit often (Brindabella, Tumut, Goulburn, Talbingo). I also wonder of the connection with Jean Robinson, I am not sure who she is, a puzzle for another day.
Exploring further in the State Library’s collection I found more items which I must research further to explore this branch of my family. Included were these photos:
There are many more items for me to follow up in the State Library’s collections when I get a chance.
Follow Anne's Family History on WordPress.com