Philip Lamothe Snell Chauncy (1816-1880), a surveyor who came to Australia in 1839, was my great great great grandfather. He lived for fourteen years in South Australia and Western Australia before coming to Victoria in 1853.

Chauncy kept diaries and in 1873, based on these, he published the Memoirs of Mrs Chauncy, a brief life of his second wife, Susan Augusta née Mitchell (1828-1867). Chauncy’s account of his time in Dunolly (below) is taken from his Memoirs.

In 1853 Chauncy was appointed as Surveyor-in-Chief for the McIvor district. He and his family moved to Heathcote. While there he surveyed the town of Heathcote and selected and surveyed Echuca.

In 1860 he was put in charge of the Dunolly Survey District and moved to Dunolly.In 1861 Chauncy

… bought a substantial stone house, unfinished, which had been built for an inn, and was in a municipal street. [Chauncy’s emphasis]

My dear Susie, with her characteristic energy, began at once, without waiting for it to be finished, to remove into it; but while we were getting in the furniture it was “jumped” by a pettyfogging lawyer, who sent up a well-known character, known as “Fighting Jack,” to take possession of it.

On the gold-fields, where the population is wandering, houses used often to be erected on Crown lands without sufficient authority, and in such cases the person actually in possession could not well be ejected, especially if he held a miner’s right to legalise his tenure.

This limb of the law, being a daring and unscrupulous man, made it part of his business to take possession of every place to which he thought no one could show a better title than himself. The fact of my having purchased the house gave me no title to the ground on which it stood, and I would not resort to the subterfuge of taking out a miner’s right or a business license, not being a miner or a store-keeper, and it was quite possible that “Fighting Jack” held a miner’s right, and so had a better title to the ground than I had.

However, I sent for two constables, and gave the man in charge. Next morning he was brought before the Police Court, when I adduced proofs that I had bought and paid for the house, but it being a question of title, the court was not competent to deal with the case, and dismissed it ; which was in fact all that I required, for I remained in undisturbed possession until I so narrowed the street as to exclude the house, and then purchased the land on which it stood from the Crown.

The position is beautiful and commanding. I subsequently erected four more rooms of brick and stone, stable, outhouses, brick tank, &c., and made an ornamental garden and vinery. The recollection of the happy time we spent in this place moves me as I write. It used to be her delight to stroll through the garden and admire the flowers and other plants ; and then, how cleverly and wisely she managed the house, and for the welfare of the children. In the evening, when they were in bed, it used to be her delight to sit and converse with me at the fireside. The six years at Dunolly were among the happiest of my life.

There is no account of this legal dispute in the digitised newspapers available through Trove.

Chauncy was an amateur photographer and took a photograph of his cottage in 1865. Members of his family can be seen on the verandah.

I have visited Dunolly and the cottage several times. The cottage is located at 8 Havelock Street. Below are some photographs I have taken of it.

When I visited in 2012 the cottage was unoccupied and for sale. I had a look around the back.

On the ground and from a map showing Havelock Street  it is not easy to see how Chauncy narrowed the road to exclude the cottage.

Concerning the Chauncy house at Heathcote 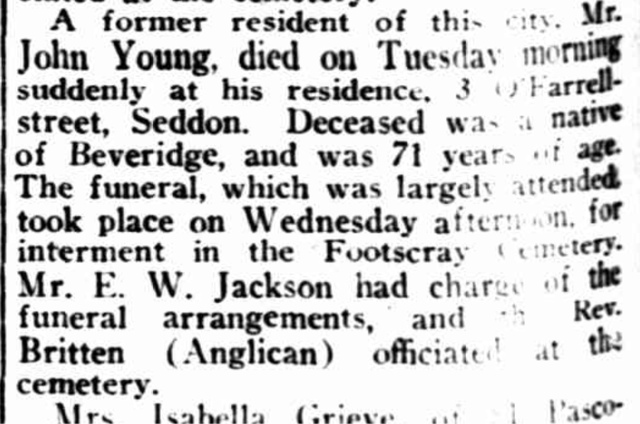