Karl Mainwaring was born 4 September 1837 at Mannheim in Germany. He died 21 August 1906 at Saint Helier, Jersey.

On 19 September 1856 Karl Mainwaring appointed as lieutenant in the Royal Navy.  From 1874 to 1893 Karl Mainwaring was harbour master in Kingston, Jamaica. He retired from the navy with the rank of captain.

In 1866 Lieutenant K.H.A Mainwaring was stationed in Hong Kong with the China Squadron on  HMS Princess Charlotte.

In July 1866 Lieutenant Mainwaring was given charge of HMS Opossum.

In 1865 HMS Opossum had been engaged in attacks on Chinese pirates in co-operation with the fleet of the Manchu Qing government. The attacks were reported in The Illustrated London News of 23 October 1865.

HMS Opossum was a wooden screw gunboat of the Albacore class which carried about 38 crew and four guns. (In the 1866 Navy List, the Opossum is listed as a tender to the Princess Charlotte and Mainwaring is in charge of the Haughty, also an Albacore class wood screw gunboat.) HMS Osprey was a Vigilant class gunboat with about 80 crew and four guns.

The attack on the pirates was reported in The Illustrated London News of 22 September 1866 and followed up with an illustration the following week.

The 1866 engagement with the pirates was widely reported. The following account is from the Melbourne Leader.

The two men were related, as third cousins four times removed. Their common ancestor was John Mainwaring (1470-1515), of Over Peover, Cheshire, sheriff of Flintshire, knighted at at the taking of Thérouanne and Tournai. John Mainwaring is my thirteenth great grandfather.

There are no known portraits of the earlier Henry Mainwaring. In the introduction to The Life and Works of Sir Henry Mainwaring printed for the Navy Records Society in 1920, the editor, G. E. Manwaring, states

There is a cartoon image of Henry Mainwaring, the pirate, in Disneyland at Anaheim in California in the area where people wait for the Pirates of the Caribbean ride.

Sir Henry Mainwaring was educated at Durham School and then at Oxford University.

When Sir Henry Mainwaring was in Rome on the Grand Tour in 1760 he was painted with his companion Lord Grey, by Sir Nathaniel Dance-Holland RA.

The painting is in the collection of the National Trust and on display at Dunham Massey in Cheshire. Henry Mainwaring, standing, is showing Grey a cameo ring.  Grey and Mainwaring commissioned Dance to paint a subject from Virgil. He painted Aeneas and Venus for Mainwaring and The Meeting of Dido and Aeneas for Grey. The latter painting is now in the Tate. Venus appearing to Aeneas and Achates as a Huntress by Nathaniel Dance dated 1762 was sold by Christie’s in 1994 for £243,500.

Mainwaring bought other paintings on the tour for example The Bay of Naples from Posillipo by Pietro Fabris and Antiquaries at Pola by Thomas Patch.

Grey bought A Punch Party in Florence by Thomas Patch which is now owned by the National Trust at Dunham Massey. 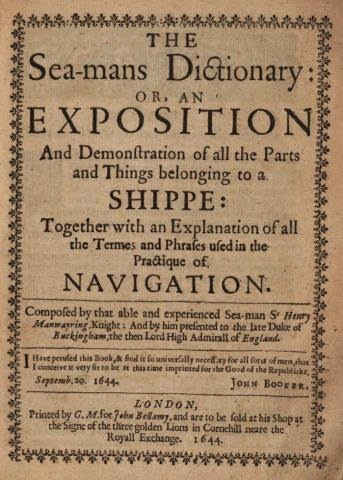