My husband Greg says he has a great number of great aunts.

One, a 3rd great, was Ellen Claxton nee Jackson, born in Fring, Norfolk in 1791 or 1792. In 1817 Ellen married William Claxton in Docking, a mile to the north, also a small and undistinguished village (which Wikipedia delicately notes ‘has experienced no noteworthy historical events peculiar to itself’).

William Claxton was a shepherd and agricultural labourer who, caught up in Wesleyan revivalism, became a Primitive Methodist preacher. Ellen was one of his converts. The Claxtons moved to Wolferton in 1820. William and Ellen Claxton had at least six children. She died in 1875, he in 1859. (One of Ellen’s sisters was Greg’s 3rd great grandmother, Sarah Ann Plowright nee Jackson (1797 – 1864).)

In 1806, and probably often enough in other years, for the craft generated a small cash income, Ellen Elizabeth Jackson embroidered a sampler, a piece of embroidery worked in various stitches as a specimen of skill, often decorated with letters of the alphabet and a motto or verse.

Some years ago a family historian from Georgia, USA, told me that information about a sampler by Ellen Elizabeth Jackson had been included in a 2013 book on samplers called Imitation & Improvement: The Norfolk Sampler Tradition, by the American textile historian Joanne Lukasher. There was further information about Ellen Jackson’s work in notes to a 2019 exhibition of samplers by the Lycoming County Historical Society [Pennsylvania]. Gary Parks, its curator, was the owner of the Jackson sampler. He kindly sent me a photograph of it, explaining that, “I purchased the sampler a number of years ago at an antique show. My justification for buying it was that my Mother’s name was ‘Ellen Elizabeth’. It is beautiful needlework.”

Most of the samplers included in Joanne Lushaker’s book were produced by girls “descended from the established middle class of skilled and hereditary craftsmen, merchants and entrepreneurs.” There were some examples from the working poor; “needlework, along with harvest work and poultry breeding, was a standard way in which women contributed to the family income”. (The Jacksons would certainly be classed as “working poor”. In the 1841 census Ellen’s father, then 81, was described as an agricultural labourer.)

In Norfolk poor and needy children were educated in charity schools. Part of the curriculum was vocational training, and girls learnt to embroider. Shawls, and other small craft items were sold to raise money for the schools.

The 1812 Annual Report of the National Society for Promoting the Education of the Poor in the Principles of the Established Church reported that the village of Fring had a Sunday school attended by 36 children. Ellen, recorded on the 1851 census as a schoolmistress, appears to have gained a broader education, possibly in a larger charity school in the district.

Ellen’s sampler is arranged as a stepped lozenge. The central framing element is common to many Norfolk samplers, with surrounding floral bouquets also a typical design element. The verse embroidered by Ellen, popular in 19th century books of religious verse and Sunday readers, was also used by some other embroiderers.

The verse was included in an Introduction to the English reader; or, A selection of pieces in prose and poetry … with rules and observations for assisting children to read with propriety. The second edition, enlarged and improved, published in 1803:

These lines had previously appeared as part of a much longer poem “The Prospect” by C. Whithorne in the 1755 edition of The General Magazine of Arts and Sciences.

At the time of the 1841 census William and Ellen Claxton were living in Wolferton, near Sandringham, 10 miles to the south of Docking. William was a labourer. Five children were living in the household; the older two were a shoemaker and a labourer.

On the 1851 census Ellen is listed as a schoolmistress, her husband William as an agricultural labourer. They lived in Wolferton. Their children had left home.

In 1861 Ellen was living with her unmarried son Abraham. Her occupation was given as ‘formerly school mistress’. Abraham was described as shoemaker and local preacher. Abraham was a Primitive Methodist like his parents.

In 1871 Ellen was living in Wolferton with her son Abraham, now ‘a shoemaker and coal agent’, and Abraham’s wife. No occupation was given for Ellen on the census.

In 1875 Ellen Claxton died in Wolferton. She was eighty-three. For the times, hers had been a long life, a long struggle with poverty an hardship. Even so, Ellen’s embroidery is a reminder that prettiness can be found in strange places and small things; we can only hope that she was rewarded from time to time by the joy that comes of creating something beautiful.

The church, now known as King’s Lynn Minster, is Grade 1 listed – a building of exceptional interest – in the register of the Historic Buildings and Monuments Commission for England. 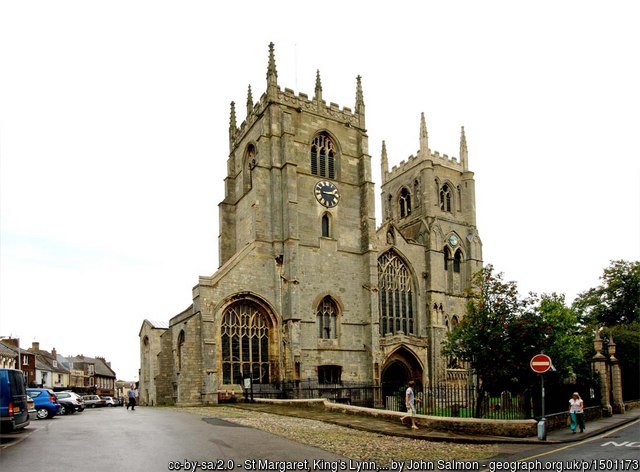 King’s Lynn Minister was founded in 1095 as part of a Benedictine Priory. Some Norman architectural elements remain. There are Gothic towers from the 12th and 15th centuries and the chancel, the area around the altar, dates from the 13th century. Part of the building collapsed in 1741 and was rebuilt in Gothic Revival style. The church was the parish church for the town of King’s Lynn and was granted the title of Minster in 2011 by the Bishop of Norwich. (Minster is an honorific title given to particular churches in England, most famously York Minster in York and Westminster in London; a minster refers more generally to “any large or important church, especially a collegiate or cathedral church”.)

John’s father William was christened at St Margaret’s in 1791.

William was a mariner. He lived at various addresses in King’s Lynn, among them:

On the 1841 census William Plowright was living at Austin Street. His occupation is described as labourer; his wife was absent; and there were eight children aged from 2 to 20 living in the household. The oldest son, William, aged 20, was a plumber. William’s wife, Sarah Plowright, was a female servant in the household of John Ayre, a merchant living in Norfolk Street, Kings Lynn.

In 1851, William, occupation seaman, Sarah, and three children and two lodgers were living at 22 North Clough Lane. Their son Edward aged 14 was a Boots at the inn. Frederick aged 12 was an errand boy, Mary Ann aged 8 was at school.

John Plowright signed on as a merchant seaman in 1858. On the 1851 census he was living in Tower Hamlets, St Pauls Shadwell, in the East End of London. He was a boarder in a house with other seamen who were also boarders.

About 1853 John Plowright sailed to Australia on the brig “Speculation”, probably as a seaman. He disembarked at Melbourne and joined the gold rush, never to return to England.