The Reverend Thomas Kemmis was the father of my 3rd great grandfather’s first wife, Charlotte Kemmis (subject of a separate blog entry). 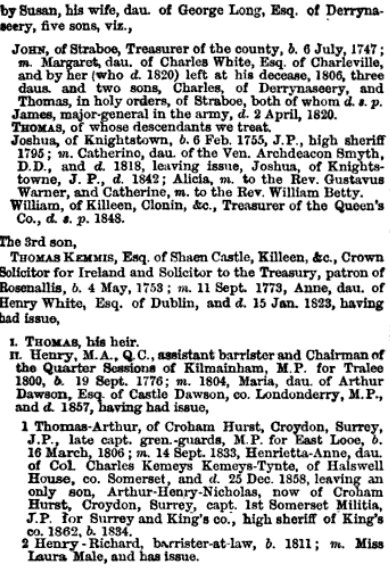 This entry does not give details of the second marriage of the Reverend Thomas Kemmis and his two children by that marriage: Charlotte and Edward.  It seems unusual for Burke to make a mistake of that kind.

The will of the Reverend Thomas Kemmis dated 23 August 1827 and probated 31 May 1828 clearly names Mary Humphrys and their children and provides for them.

A careful reading of the will suggests that Thomas did not marry Mary.  He states

Whereas Mary Humphrys formerly of Grotton [illegible] who has lived with me several years and by whom I have two children namely Charlotte & Edward and who are totally unprovided for it is my wish in the first instance to [illegible] a moderate provision & hereby authorize and empower my Executors ….

On the second page of the will, he continues to refer to Mary as Mary Humphrys and thus it seems clear that they had not married.

My father was the eldest son, and consequently heir to a vary large property and though unsuited to the profession, entered the church in order to keep the livings, as I suppose, as much as possible in the family, and many of these were in his father’s gift.
My father then was a pluralist – a man of the very highest breeding, natty to a degree and in dress was most scrupulous (took two hours to dress every morning) and ranking of first order in those beau Brummell days. The celebrated Hoby of London was his bootmaker of whose specimens he always had racks full and so with his gloves and all other articles of dress. (Kemmis, Henry & Macintyre, J. Keith. The wreck of the Loch Ard (1889). Copy of notes made by Henry Kemmis; page 2. Copy held by the State Library of Victoria)

Thomas Kemmis died at Woodside Cheshire, opposite Liverpool, in 1827.

In 1841 Philip Lamothe Snell Chauncy (my 3rd great grandfather) married Miss Charlotte Kemmis.  They had arrived in South Australia together aboard the Dumfries on 11 October 1839.  Charlotte Kemmis was accompanying her half-brother and his family.

In his memoirs of his second wife, Philip Chauncy summarised his first marriage:

I will now advert to my own history from the time I left England in June, 1839. I landed from the good ship Dumfries, at Glenelg in South Australia, in the following October ; was married to Miss Charlotte Kemmis in Adelaide, on the 16th March, 1841, and removed to Fremantle, Western Australia, in the beginning of the following month. … [Chauncy was appointed as assistant surveyor and went to live at Guildford] … Six years had passed away, and on the 11th day of February, 1847, I was plunged into my first grief by the death of my much loved wife, who was the daughter of an Irish clergyman of the Church of England and a true Christian. I was overwhelmed by an agony of grief, and obtained six months leave of absence … (Chauncy, Philip Lamothe Snell (1976). Memoirs of Mrs Poole and Mrs Chauncy. Lowden, Kilmore, Vic, page 28)

The marriage of Philip Chauncy and Charlotte Kemmis was announced with the minimum of detail in the South Australian of 19 March 1841:

Charlotte Chauncy was buried in East Perth cemetery.  Her age was given as 31; she was born about 1816.

Both Philip Chauncy and Henry Kemmis, Charlotte’s half-brother, included an account of the voyage of the Dumfries in their memoirs which are held in the State Library of Victoria.

The memoir of Henry Kemmis  (State Library of Victoria MS 11774 Kemmis, Henry & Macintyre, J. Keith. The wreck of the Loch Ard (1889). Copy of notes made by Henry Kemmis.) has a section on the voyage of the Dumfries.  It does not mention that his sister was with him, nor does it make mention of Philip Chauncy as a fellow passenger.  Although he discusses his parents and his mother’s death, Henry Kemmis does not mention his father’s mistress nor his half-siblings.

The notes for Philip Chauncy’s memoir also held by the State Library of Victoria (MS 9287 Chauncy, Philip Lamothe Snell (1839). Papers.) also include details of the voyage.  Chauncy’s comments indicate that he did not care for Henry Kemmis or his wife but found Henry Kemmis’s sister Charlotte good company.  Charlotte was stated to be sharing a cabin with a child of her brother.

Henry Kemmis does not name his sisters in his memoir but does discuss his father. Philip Chauncy never named his wife’s father but did say she was the sister of Henry Kemmis. The father of Henry Kemmis, the Reverend Thomas Kemmis of Brockley Park, left a will, and in it he names  Mary Humphrys “who has lived with me several years and by whom I have two children namely Charlotte & Edward”. He also names his children Arthur, Henry and Mary as residual legatees and his brother Henry Kemmis as executor.

Philip and Charlotte had no children.
I do not know what became of Charlotte’s mother and brother Edward.  I have since been contacted by a descendant of Edward as a result of this blog entry :). Edward Rupert Humphreys (1820 – 1893) lived in Ireland, Cambridge (Magdalen Coll), Prince Edward Island, Edinburgh, Cheltenham and finally Boston. While Edward was living on Prince Edward island, the local newspaper, the Island Register, recorded on AUG. 06, 1847, DIED ON 11 FEBRUARY LAST, CHARLOTTE OF DYSENTERY, WIFE OF PHILIP S. CHAUCEY, SURVEYOR GENERAL OF WEST AUSTRALIA AND SISTER OF E. R. HUMPHREYS OF PRINCE EDWARD ISLAND. (retrieved from http://www.islandregister.com/islander.htm an index to “The Islander” Vital Statistics ) It seems Charlotte and Edward’s mother married; Edward’s Boston death record lists his mother’s name as Mary Berry.
Charlotte’s half brother Henry died near Port Macquarie in 1894. One of his sons was a clergyman there. (Local and General News. (1894, March 17). The Port Macquarie News and Hastings River Advocate (NSW : 1882 – 1950), p. 5. Retrieved August 25, 2013, from http://nla.gov.au/nla.news-article120149560)
Another half-brother, Arthur, had emigrated to Australia at about the time of his father’s death in 1827 and died in 1842. He was a successful businessman and his obituary credits him as ‘the “Founder of Steam Navigation” at Port Phillip’.(Family Notices. (1842, April 15). Southern Australian (Adelaide, SA : 1838 – 1844), p. 2. Retrieved August 25, 2013, from http://nla.gov.au/nla.news-article71621132
) (‘Kemmis, Arthur (1806–1842)’, Obituaries Australia, National Centre of Biography, Australian National University, http://oa.anu.edu.au/obituary/kemmis-arthur-13871/text24738, accessed 25 August 2013.)
Charlotte’s oldest half brother, Thomas, died in 1844 in Ireland. (Family Notices. (1845, January 28). The Sydney Morning Herald(NSW : 1842 – 1954), p. 3. Retrieved August 25, 2013, from http://nla.gov.au/nla.news-article12876992)
Follow Anne's Family History on WordPress.com