This week’s Sepia Saturday prompt is the sea. In fact, the prompt picture of Bondi Beach inspires thoughts of holidays by the beach, but I have recently been researching several members of my family who died at sea and I was reminded that the sea is not always benign. 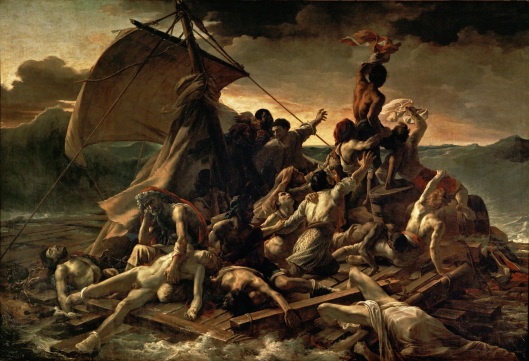 The Raft of the Medusa by Théodore Géricault painted 1818-1819 and now hanging in the Louvre. The Méduse was wrecked off the coast of Africa in 1816. Of the 400 on board only 15 survived.

Arthur Branthwayt (1776-1808) was the second husband of my 5th great grandmother Elizabeth née Phipps (1774-1836). He died at sea in a shipwreck. He was travelling to Gothenburg and the Crescent, a frigate with 36 guns, which was lost off the coast of Jutland. 220 of the 280 aboard her died. A raft was constructed, similar to the Méduse‘s. Arthur Branthwayt’s wife, eight-month-old daughter and four step-children were not travelling with him.
Arthur Branthwayt’s grandson, Arthur Branthwayt Toker (1834 – 1866), my first cousin five times removed, is doubly related to me as his mother married her half-sister’s nephew by marriage, the son of Clarissa Champion de Crespigny (1776 – 1836). Young Arthur died at sea of typhoid fever while returning to England from New Zealand. He had been an officer in the 65th Regiment (later the York and Lancaster Regiment) and fought in the Maori Wars. He was unmarried.

In 1814 another shipwreck took the lives of Henry Gore Wade, his wife and children. Wade was the brother-in law of my fourth great uncle Philip Champion de Crespigny (1765 – 1851).  The Wade family were returning to England from India and died when the John Palmer was wrecked.

Gordon Skelly, who died in 1771, was my 6th great grandfather. His granddaughter Sophia née Duff (1790 – 1824) married Rowland Mainwaring (1783 – 1862). Skelly was the captain of the Royal Navy sloop Lynx stationed at Shields Yorkshire. He was drowned when his ship’s long boat, ,crossing the bar of the harbour, was overturned by breakers. At the time of his death his two children were aged four and three.

When I checked my family tree I found a number of others who died at sea:

My great great grandfather, James Francis Cudmore (1837 – 1912) was born at sea aboard the Siren off the coast of Kangaroo Island. His mother, Mary née Nihill (1811 -1893) was travelling from Launceston to the very new colony of Adelaide to join her husband Daniel Michael Paul Cudmore (1811 – 1891).
My husband’s great great grandmother Margaret née Smyth (1834 – 1897) gave birth to a baby boy as she travelled to Australia from Ireland on the Persian. The baby is recorded on the passenger list but it is not known what happened to him after arrival. He probably died as an infant. His death was before compulsory civil registration.

3 thoughts on “Deaths at sea”