A family history trip would not be complete without a visit to a cemetery.

The Gloucestershire Family History Society have transcribed the tombstone inscriptions for the burials in St Peter’s Churchyard, Leckhampton. 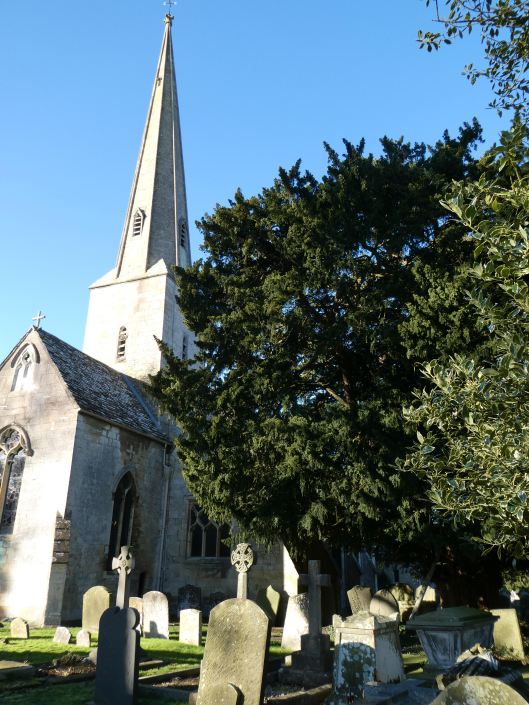 St Peter’s Leckhampton. I think the Champion Crespigny tomb can be seen on the right hand side underneath a cyprus. 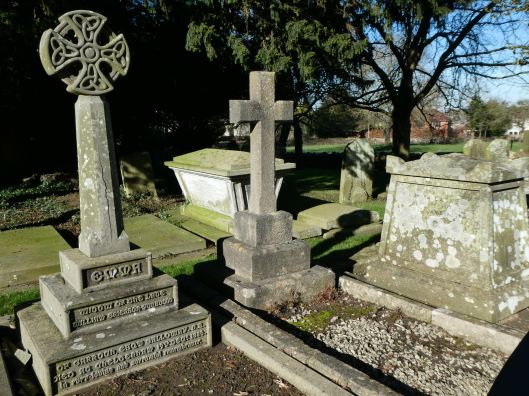 The south side of the grave of Eliza and Charles Fox Champion Crespigny can be seen in the background – it is a large casket. In the foreground is the grave of their daughter Constantia, a cross on a three stepped plinth. The inscription on this side of the chest tomb has been transcribed: M11 Chest-tomb, on base, inward sloping sides, worn, once painted. Sc: LEWIS.Sc. South: IN MEMORY OF / CHARLES FOX CHAMPION CRESPIGNY, / BORN AT HINTLESHAM HALL NEAR IPSWICH 30TH AUGUST 1785, / DIED AT CHELTENHAM 4TH MARCH 1875. / IN SURE AND CERTAIN HOPE OF BEING RAISED WITH THE FAITHFUL IN CHRIST / TO EVERLASTING LIFE. / ALSO OF CONSTANTINE TRENT PULTENEY CHAMPION CRESPIGNY. / LATE OF H.M. 69th REGT BORN 5TH MAY 1851. DIED 26TH JANUARY 18–. / YOUNGEST SON OF PHILIP ROBERT CHAMPION CRESPIGNY / OF ST KILDA, MELBOURNE, AUSTRALIA / – – – – – – LL YE THAT LABOUR AND – – – HEAVY LADEN – – – WILL OF – – –

The verse under Constantine’s inscription is Matthew 11:28: Come to me, all you that labor and are heavy laden, and I will give you rest. The verse for his grandfather is derived from the Book of Common Prayer but is not a direct quote. 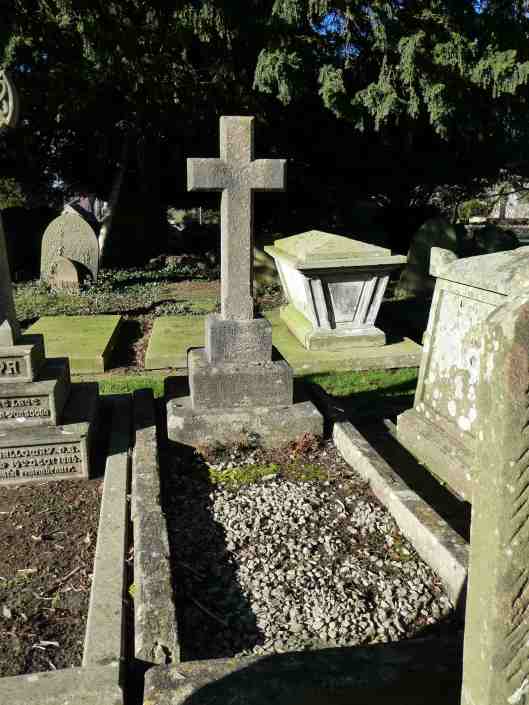 I am grateful for the photographs of the grave and I look forward to seeing it in person. I enjoy being at a place I’ve heard about and of course part of the fun is the journey there.

Charles Fox Champion de Crespigny inherited a considerable fortune but it dwindled away. I don’t know how he lost his money. Perhaps some of his investments failed or a bank collapsed. He does not appear to have been a gambler. Perhaps he was extravagant. The grave he erected for his wife and was later interred in certainly seems more overdone than most.

I am not sure why the family was living in Cheltenham, nor what the connection was to Leckhampton and why it was chosen for the grave of Eliza. Charles grew up in Suffolk. They married in London, and their children were born in Suffolk, Belgium and France. In 1841 they were living in Cheltenham, and although they were at Harefield Surrey in 1851 living with Charles’s brother Philip, they returned to Cheltenham after Philip’s death and were living there at the time of Eliza’s death. Leckhampton is only two miles south of Cheltenham. Perhaps it was the nearest graveyard to their residence, at 11 Royal Parade.

Ah well he lies buried in an old world Churchyard in the shadow of the Cotswold Hills & may the turf lie lightly upon him. I do not think he left an enemy behind him & if he had as many thousands a year at the beginning of his life as he had of fifty pounds at its close I believe he lived the life.

I look forward to visiting the old world churchyard in the shadow of the Cotswold Hills where my fourth great grandparents rest in peace.

Beneath those rugged elms, that yew-tree’s shade,
Where heaves the turf in many a mould’ring heap,
Each in his narrow cell for ever laid,
The rude forefathers of the hamlet sleep.

9 thoughts on “L is for Leckhampton”