None of my forebears has a first name starting with Y, so the third personal name of Jacob Robert Yannasch Goldstein (1841-1910), the husband of my third great aunt, will have to do.

His name ‘Yannasch’, probably a variant of John, means “Jehovah has been gracious”.

In 1858 Jacob Goldstein, then 17, emigrated to Australia, arriving in Melbourne on 29 April 1858. He could read and write, was a native of county Armagh, and his religion was Presbyterian. He had sailed on the Arabian, which left Liverpool on 27 January with 365 government immigrants. The Argus reported that she had experienced fine weather during the passage, that she was very clean, and that the passengers were in good health. When he disembarked Jacob stated he intended to be employed on his own account.

From the early 1860s Jacob ran a general store in Portland, a Victorian coastal town. We catch a few glimpses of him there over the next decade: in 1863 racing a horse; in 1864 playing cricket with the Portland cricket club; in 1867 a lieutenant with the Western Artillery, part of the Victorian volunteer artillery (he served for 30 years without seeing any active service, achieving the rank of Lieutenant-Colonel); in 1868 writing about birds and ornithology to the local paper.

Jacob and Isabella had five children:

His marriage and the births of his children were announced in The Belfast Newsletter, an Irish newspaper.

Much of the Goldstein family history has been documented in The Goldstein Story, by Jacob’s grand daughter, Lina’s daughter Leslie Henderson (1896-1982). 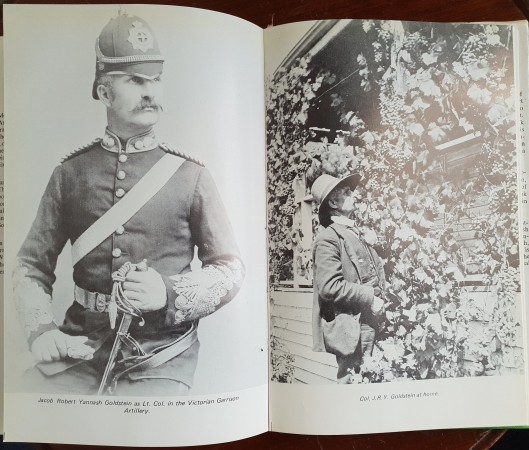 Jacob Goldstein: photographs in The Goldstein Story by his grand daughter Leslie Henderson.

Leslie argues that Jacob was not close to his father nor to his own children.

Both Jacob and his wife Isabella were interested in social service, devoting much time and effort to work among the poor.

According to the Australian Dictionary of Biography, ‘Jacob Goldstein encouraged his daughters to be economically and intellectually independent’. With her more famous daughter Vida, Isabella was a keen proponent of women’s suffrage;  Leslie Henderson believes that Jacob  was less enthusiastic. [The ADB calls Jacob an ‘an anti-suffragist’.]

In Melbourne, the Goldsteins attended the Scots’ (Presbyterian) Church, whose minister the Reverend Charles Strong was forced to resign over heresy charges in 1883. When Strong later set up his own ‘Australian Church’ the Goldstein’s became members. In the late 1890s Isabella and her daughters, though not Jacob, became Christian Scientists, followers of the spiritual healer Mary Baker Eddy. 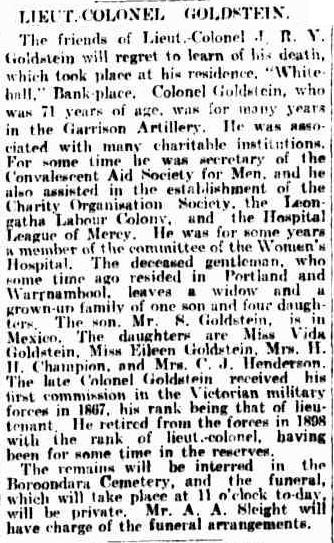 9 thoughts on “Y is for Yannasch”