This week’s Sepia Saturday prompt image is of a water mill in Wales.

He and his wife Mary had five children aged between 6 months and 9 years.  One was my husband’s great great grandmother Sarah (1837 – 1895).

When I was looking for information about the Sheepwash mill, Gary from Sheepwash told me that the mill site now had only ruined buildings. He referred me to the 1839 tithe apportionments and map, and pointed out that millers tended to move around quite a bit as they rarely owned their own mills.

In 1839 Upcott Mill at Sheepwash was owned by the Reverend William Bickford Coham and George Coham Esquire who seem to have owned considerable amounts of land  in the area. The Tithe apportionment shows a number of fields and an orchard associated with the mill.

The location of Upcott Mill north of the village of Sheepwash on Mussel Brook can be seen from the full map and can be compared with Google maps. 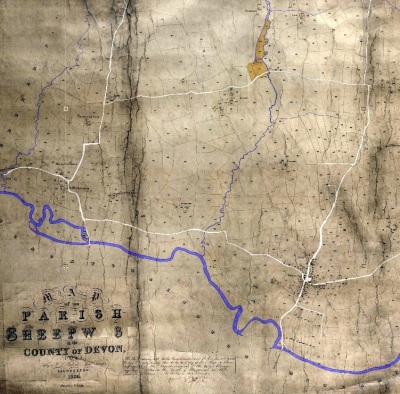 In 1851 the Daw family were at Wendron, Cornwall, just over 80 miles south-west of Sheepwash.  In the 1851 census William Daw was described as a miller and farmer of 25 acres.

Confirmation that it is the same family is obtained from the birthplaces. For example, Elizabeth aged 11 in 1851 was born in “Shipwash”, Devon.

Trelubis, also written Trelubbas, was a hamlet midway between Helston and Wendron near Trannack,. It is not marked on Googlemaps.

The 1876 Ordnance Survey map gives more detail, though I am not sure where the mill at Trelubis was. Perhaps it was the mill immediately above the label ‘Lower Town‘.

In November 1851 there was an accident at the mill, serious but not fatal:

SERIOUS ACCIDENT ­ On Thursday the 13th instant, as a little girl named BISHOP was amusing herself by putting straws into a thrashing machine, situate at the back of Mr. DAWE’s Flour Mills, at Lower Town, near Helston, her arm got entangled in the machine, and was torn off just below the elbow. Medical assistance was promptly obtains, and amputation above the elbow joint being necessary it was performed by Messrs. BORLASE and ROSKRUGE, and the child is doing well. Not many minutes before the accident Mr. Dawe had sent her out of the building, but she had returned unobserved. (I am not sure which newspaper this comes from. This item is in the newspaper collection of Sheila Pryor.)

In 1853 the Daw’s youngest child Sophia was drowned. She was just 14 months old.

Another newspaper report of 3 June 1853

On Tuesday, a little girl, daughter of Mr. DAWE, miller, of Lowertown, in Wendren, came by her death in a most melancholy manner. The child who was only fourteen months old, was suddenly missed, and there being a river running in front of Mr. Daw’s house by which the mill is worked, search was immediately made, and after an hour and a half, the body was found in a pit at the bottom of the river, having previously passed over the mill wheel, under two bridges, and down the stream a considerable distance. (Newspaper item in the collection of Sheila Pryor.)

I learned from the family history website of  Lorna Henderson, my husband’s 5th cousin,  (http://familytree.lornahen.com/pi27.htm ) that the Daw family were millers in a number of places in Devon and Cornwall. Lorna was trying to work out which family members might be pictured in a photograph that her grandmother had of Lumburn Mill, Tavistock, West Devon.

I still have much research to do on this generation of the family.