On Thursday 16 May, we left Edinburgh, crossed the Firth of Forth and, about three hundred kilometers later, arrived at Lochend, near Loch Ness, our next overnight stay. On the way we visited Abernethy and Pitlochry, passed through the Cairngorms, and walked around the battlefield of Culloden Moor.

crossing the Firth of Forth on the Queensferry Crossing (opened 2017)

The first of my forebears to migrate to Australia was my fifth great grandfather George Taylor (1758 – 1828), who arrived in Tasmania, then known as Van Diemen’s Land, in 1823. With him was his wife Mary née Low (1765 -1850) and four children: three of his sons, and one daughter. His daughter Isabella Hutcheson née Taylor (1794-1876), my fourth great grandmother, followed ten years later, arriving about 1833. Other family
members followed.

Since about 1670, the Taylors had lived on a farm of seven hundred acres near Abernethy, tenants of the Earl of Mansfield. In her family history book “Cherry Stones”, Helen Hudson wrote that the Taylors realised a considerable amount of money by selling various goods, stock, farm implements, and other property, and were granted land in Tasmania. George Taylor and the first of the Taylor emigrants sailed forth from Leith, the port of Edinburgh.

At Abernethy we admired the Round Tower which dates from the 11th century, church and churchyard. We looked at some of the graves. One headstone had the surname Low, perhaps a relative through George Taylor’s wife Mary.

the countryside near Abernethy 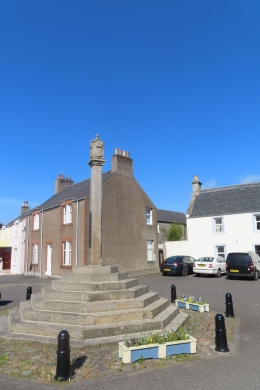 From Abernethy we continued north, stopping for morning tea at Pitlochry, very pretty but very busy with tourists and everything, including morning tea, very expensive. We then drove through the Cairngorms, a stunning plateau of rounded glacial mountains. We arrived at Culloden Moor in time for a late lunch. 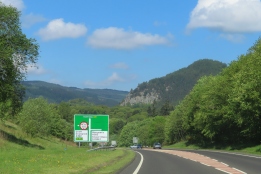 Pitlochry – pretty but lots of tourists and expensive 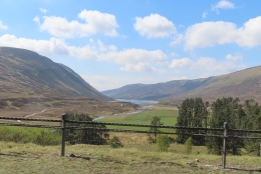 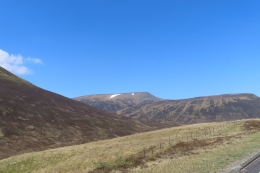 After lunch we walked across the battlefield. It was a beautiful sunny afternoon and I found it hard to picture the few acres of flat grassy ground as the site of a bloody battle – a thorough defeat for the Jacobites. Exhausted by their long march the previous night they were no match for the better equipped and disciplined English. The butchery lasted just an hour.

One of Charles Stuart’s supporters at the battle was David, Lord Ogilvy (1725-1803), who raised a regiment for the Young Pretender. It was cut to shreds at Culloden and Ogilvy was captured and imprisoned in Edinburgh Castle. His wife, Margaret Ogilvy née Johnstone (1724-1757), my 7th great-aunt, also captured and imprisoned there, escaped six months later, ‘disguised as a washerwoman’. Ogilvy is also said to have escaped, dressed as a woman in his sister’s clothes. 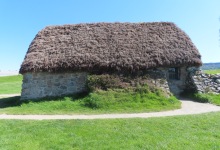 Culloden battlefield : thatched roofed farmhouse of Leanach which stands today dates from about 1760; however, it stands on the same location as the turf-walled cottage that probably served as a field hospital for government troops following the battle

Culloden battlefield headstones that mark the mass graves of fallen Jacobite soldiers. They lie on either side of an early 19th-century road which runs through the battlefield. 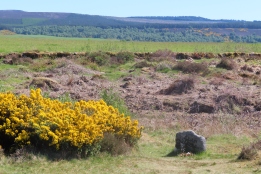 Culloden battlefield headstones that mark the mass graves of fallen Jacobite soldiers. They lie on either side of an early 19th-century road which runs through the battlefield.

At Loch Ness we stayed in a renovated crofter’s cottage with superb views over the water and the hills beyond, including Aldourie Castle across the Loch. No Nessie, though. The more we looked the more she wasn’t there.  Peter and I had a very fine haggis for dinner, bought from an Inverness supermarket.  In the middle of the night I heard what I think was a large deer moving about in the woods beside our cottage. It might have been the Monster, I suppose.

The view of Loch Ness from our croft

View from the cottage window of Loch Ness

Aldourie Castle was across Loch Ness from our croft

Peter playing with the owner’s dog 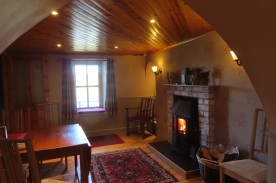 the croft was very cosy inside

2 thoughts on “Forth to Loch Ness”