Philip’s older brother William had been appointed to a lawyer, a member of the Inner Temple, one of the Inns of Court. Philip was entering a different area of law to William. Had he not died an early death (in 1721) before he qualified, William would have gained the right to practice in the regular courts of England governed by Common Law, that is, law based on precedent and derived from judicial decisions of courts and similar tribunals. 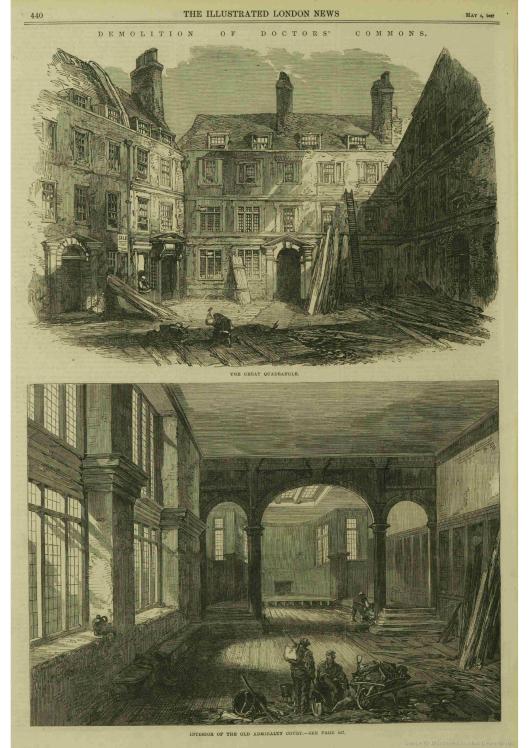 The Arches Court, which Philip entered, was an ecclesiastical court that specialised in the legal practice of Civil Law based on the Roman tradition. This legal system originated in Europe, and was set within the framework of Roman law, with its core principles codified into a referable system serving as the foundation of its jurisprudence.

The intellectual framework of Common law systems, by contrast, is derived from judge-made decisional law, which gives precedential authority to prior court decisions.

Besides its jurisdiction over members of the clergy in the Province of Canterbury, governing all the southern part of England, the Court of Arches had authority over legal matters concerning inheritance and marriage, notably the probate of wills and questions of divorce. Oddly enough, practitioners were also authorised to deal with cases of admiralty law. Given that these commonly involved international affairs, admiralty law was based on Roman law rather than English Common Law. The separate jurisdiction developed in medieval times and continued into the nineteenth century.

Doctors’ Commons (also called the College of Civilians), was a society of lawyers founded in 1511 practising Civil Law in London. It had its main buildings, with a large library and rooms where its members lived and worked, in Knightrider Street. Court proceedings of the civil law courts were held in Doctors’ Commons. The society used St Benet’s, Paul’s Wharf as its church. Doctors’ Commons was dissolved following the Court of Probate Act, 1857.

The 1857 Act abolished separate ecclesiastical jurisdiction over wills and testaments, and a Matrimonial Causes Act created a new court to deal with divorce. Both these areas were now opened to practitioners of the Common Law, and members of the College lost their special authority. In 1859 an Act established the High Court of Admiralty too, and the remnant ecclesiastical matters handled by the Court of Arches were also abolished a few years later. The purpose of the College thus came to an end, and the buildings of Doctors Commons were demolished in 1865. 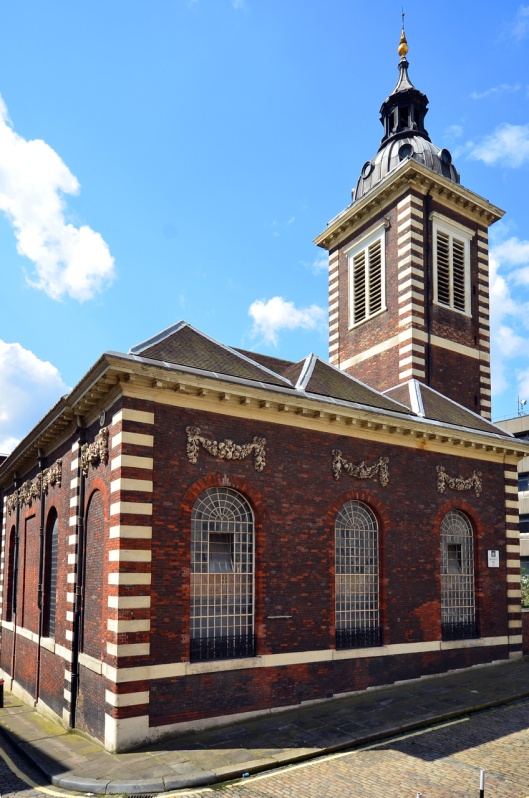 St Benet’s, Paul’s Wharf. The church was rebuilt after the Great Fire by Christopher Wren’s Company. It was one of only four City churches to escape the bombs of the Blitz. Photograph by George Rex, retrieved from Wikimedia Commons (CC BY-SA 2.0)

Proctors or procurators of the Court of Arches were analogous to solicitors, and entry to their ranks was based upon a seven-year term of service as an articled clerk. Since there were only thirty-four Proctors, and each was allowed just one such apprentice at a time, Philip was fortunate to have obtained a vacancy; there may have been family assistance [Mum ponied up 126 quid!]. Apprentices were required to have a good classical education, best provided by a grammar school, so someone in the family, probably his uncle Pierre Champion de Crespigny, had worked to prepare the young man for the opportunity. 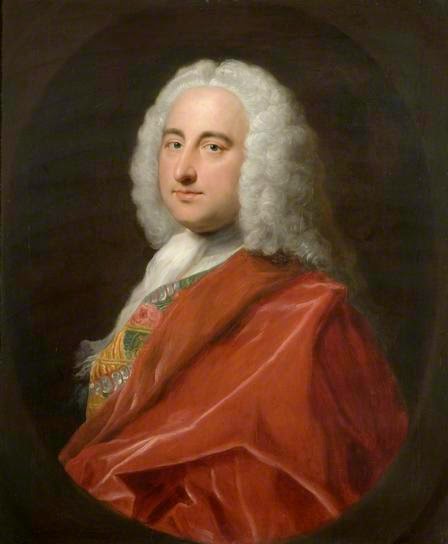 Philip had a very successful career, culminating in his appointment as Procurator-General of the Court of Arches.

In 1731 he married Anne Fonnereau at St Paul’s Cathedral, not far from his offices at Doctor’s Commons. Their daughter Jane was baptised in 1733 at St Benet’s, Paul’s Wharf. Five of Jane’s siblings – Claude, Susan, Anne, Philip, and another Anne – were also baptised there. 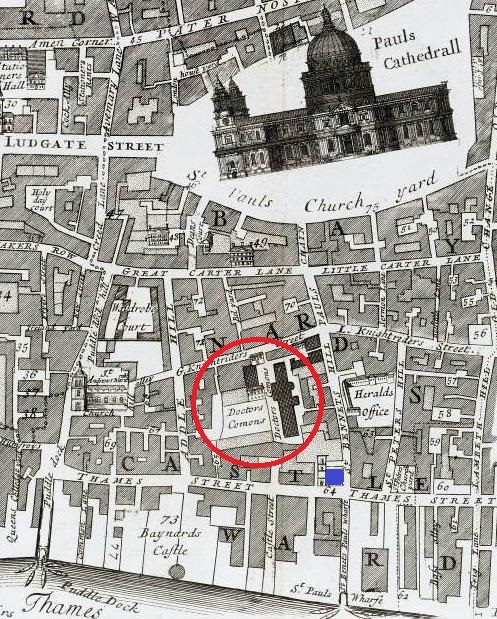 Doctors Commons [circled] between St Paul’s Cathedral and the Thames. The church of St Benet’s Paul’s Wharf[e] is marked in blue. Detail from John Strype, A Survey of the Cities of London and Westminster, 1720

6 thoughts on “K is for Knightrider Street”