Earlier this year we were forced to flee from a catastrophic bushfire on the Australian east coast. It burnt out an area the size of England. Now, just a few months later, we’re self-quarantined against the COVID-19 plague, at home with the doors shut, permitted out only to buy food.

We Antipodeans, of course, got it the wrong way around. London had its plague first, from 1665, then its fire, in 1666. Whatever the order of events, of course, catastrophes are no fun for anybody.

In a year and half, the Great Plague of London – a rapid-spreading bacterial infection, rather than a virus – killed nearly 100,000 people, a quarter of the city’s population.

As it spread, a system of quarantine was introduced. A house where someone had died from plague would be locked, with no one allowed to enter or leave for 40 days. A plague house was marked with a red cross on the door and the words “Lord have mercy upon us”, and a watchman stood guard in the street. 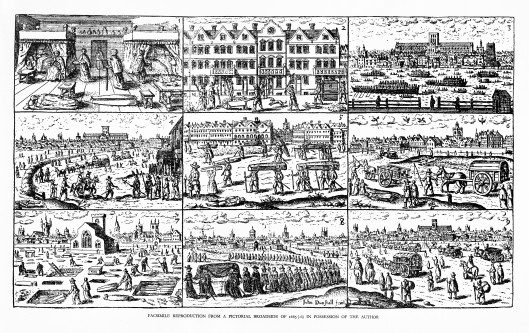 Nine images of the Great Plague of London in 1665 from The great plague in London in 1665 by Walter George Bell From the Wellcome Trust CC-BY-4.0,  retrieved through Wikimedia Commons

I have an ancestor who was a doctor at the time, probably a plague doctor. This was Ichabod Chauncy (abt 1635 – 1691), one of my 8th great grandfathers. Like his father, Ichabod Chauncy was a clergyman, but in 1662 he was forced to leave the clergy, one of some 2,000 Puritan ministers forced out for what were deemed to be their unorthodox beliefs. He took up the profession of medicine instead, and in 1666 he was admitted to the College of Physicians. It seems very probable that Ichabod Chauncy treated victims of the plague and wore the plague-doctors’ beak-like mask filled with aromatic herbs designed to protect the wearer from putrid air, which according to the miasmatic theory of disease was the cause of infection. 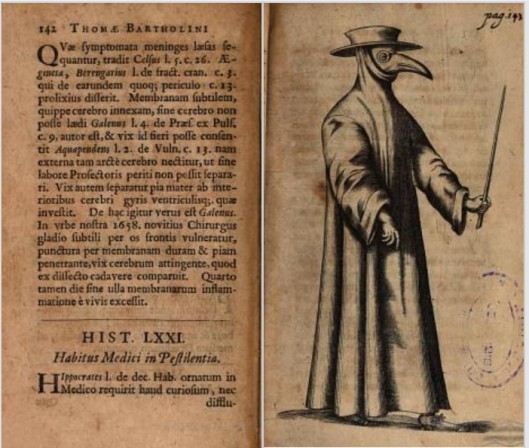 Then came the fire, a huge conflagration which burned for four days in September 1666, completely destroying the medieval City of London inside the old Roman city wall. The homes of 70,000 people, more than three-quarters of the population of the city, were burnt to ashes. There were officially only six deaths; many went unrecorded. 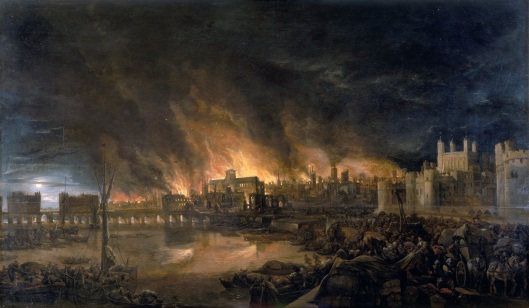 Great Fire of London by an unknown artist about 1675 retrieved from Wikimedia Commons. “This painting shows the great fire of London as seen from a boat in vicinity of Tower Wharf. The painting depicts Old London Bridge, various houses, a drawbridge and wooden parapet, the churches of St Dunstan-in-the-West and St Bride’s, All Hallow’s the Great, Old St Paul’s, St Magnus the Martyr, St Lawrence Pountney, St Mary-le-Bow, St Dunstan-in-the East and Tower of London. The painting is in the [style] of the Dutch School and is not dated or signed.”

After the fire, London was rebuilt on essentially the same street plan. About three-fifths of the City of London had been destroyed: 13,200 houses, most great public buildings, St Paul’s Cathedral and 87 parish churches. Rebuilding housing took until the 1670s. Public buildings took longer, with St Paul’s finished only in 1711. This program had a modernising effect, for the city was now less dense, with only 9,000 houses rebuilt and not all churches and public buildings replaced. 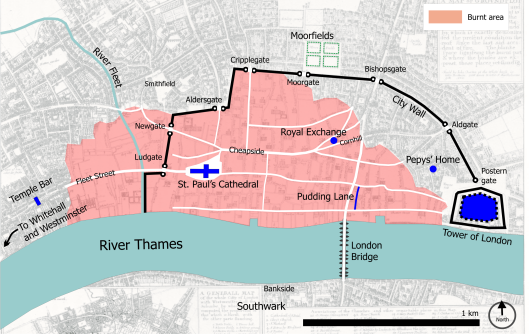 Map of central London in 1666, showing landmarks related to the Great Fire of London. Drawn by Wikipedia user Bunchofgrapes and retrieved from Wikimedia Commons (CC-BY-SA 3.0)

It is interesting that despite being separated from the events in London by 355 years and half way around the globe, we are experiencing similar catastrophes and coping along the same lines.

7 thoughts on “F is for Fire following Plague”