In June 1839, at the age of twenty-three, Philip Lamothe Snell Chauncy (1816 – 1880), one of my 3rd great grandfathers, sailed from London for Adelaide in South Australia on the “Dumfries“, arriving in October 1839. On the passage Philip made the acquaintance of  Charlotte Kemmis (1816 – 1847). They married two years later, in 1841. Neither Philip nor his wife ever returned to England. 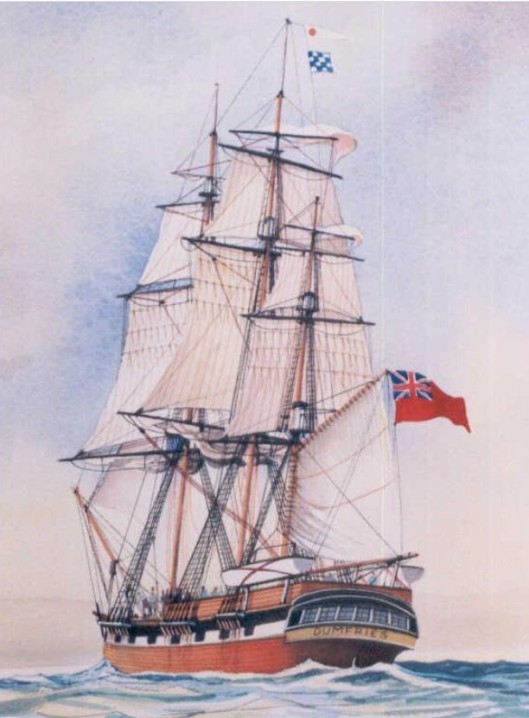 The “Dumfries” From an original watercolour by John Ford F.A.S.M.A. 2004 and reproduced with permission. The “Dumfries” was a barque, sometimes spelled bark, a square-rigged ship with the aft (mizzen) mast rigged fore-and-aft. Barques were easier to handle than fully square-rigged ships and so required a smaller crew. At some points of sail they were almost as fast. However, John Ford has let me know that according to his records the “Dumfries” was shipped rigged not a barque.

Late in life Philip Chauncy wrote a memoir including a description of his departure from London. A copy of the manuscript is deposited in the State Library of Victoria. Below are images of some of the pages.

On 14 June Philip did some sightseeing around London, visited the famous Tower, then went aboard the “Dumfries” moored immediately downstream of it at St Katherine’s Dock. There he shared a bottle of wine with his father, a brother and two of his sisters to celebrate his coming departure. 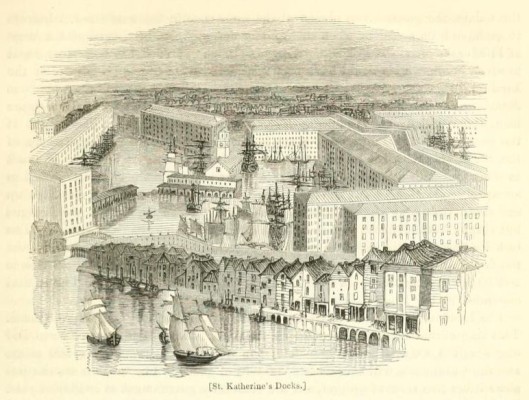 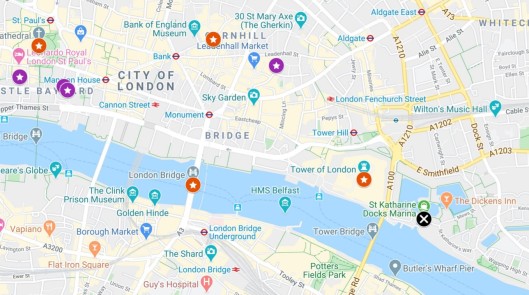 St Katherine’s Docks marked with an x is just downstream of the Tower of London and the Tower Bridge.

On 15 June Philip went to the zoo, and later he visited his various Snell and Chauncy relatives. He spent 17 and 18 June packing and getting his goods on board. On 19 June he visited his father at his home in Clapham. On 20 June he slept on board, where he had, he said, a bad bilious attack. He went ashore again the next day, his 23rd birthday, and dined with his family. They later came on board with him and bid him farewell.

The “Dumfries” set sail on 22 June at 5.45 pm and drifted 30 miles down the Thames to the Nore, a sandbank at the mouth of the Thames, where they anchored near the lightship.

Philip, of course, was sorry to be leaving his family. But he was joining his two sisters, Martha and Theresa, who had already emigrated and he believed his father would follow him out to Australia shortly. Everybody except for his sister Eunice did indeed emigrate as he had hoped. On the whole it appears that Philip left England without regret, looking forward to a new life in a new country.

On 23 June the “Dumfries” sailed from the Nore and anchored off the North Foreland, a chalk headland on the Kent coast. Philip wrote to his father and amused himself by fishing. 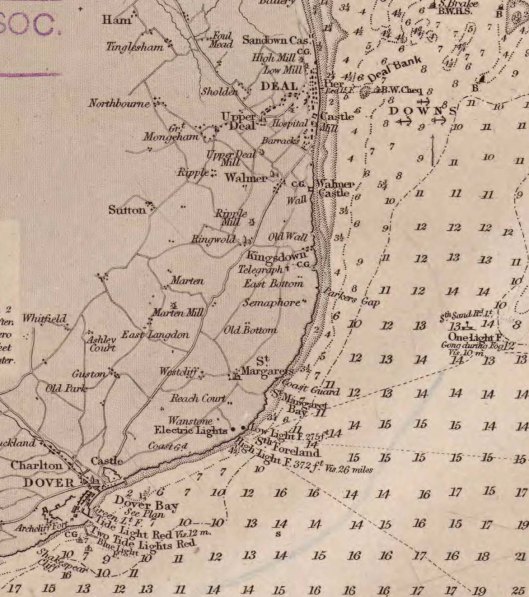 1848 chart showing the position of the Downs off the coast of Kent. (depths are in fathoms). From Admiralty Chart No 1895 England south coast sheet 7 Dungeness to the Thames including Dover Strait, Published 1848. Retrieved from Wikimedia Commons. 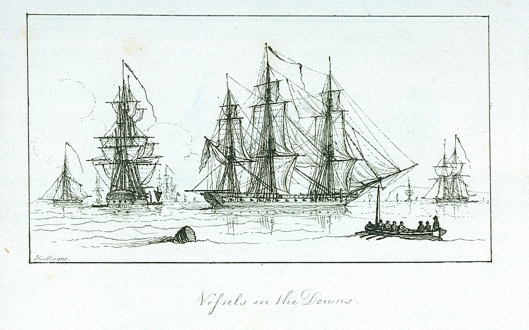 Vessels in the Downs Sketch in a book entitled ‘The Marine sketch book by H. Moses 1826‘. Retrieved from Wikimedia Commons.

On 25 June they anchored in the Downs off the Kent coast. The next morning Philip and six fellow cabin passengers went ashore a mile below Deal. They walked through the town, made some purchases, and returned on board with a cat.

From that time Philip began to keep a proper sea journal in a log book he bought for the purpose. He also started to read the two volumes of Major Mitchell’s recently been published “Three Expeditions Into the Interior of Eastern Australia“.

The ship “Dumfries” had been built quite recently. This was her second or third voyage. Philip notes that there were 16 cabin passengers including 3 children, 29 adults and 15 children in the intermediate class, 23 in steerage. There were 22 in the ship’s company, a total of 105 persons on board. (An Airbus A380 can carry 868 passengers.) Philip took a cabin with Henry Kemmis, his future brother-in-law, and they each paid 70 pounds. A school teacher’s annual salary was then about 80 pounds. An air ticket from London to Adelaide is for most people less than a weeks wage, and even a first class fare is a fraction of the annual salary of a school teacher.

The wind had been blowing a gale from the west. It finally moderated and veered to the east and at 3pm on 26 June they sailed from the Downs, tacking between Beachey Head and the coast of France. The “Dumfries” finally cleared the Channel on 1 July. During the stormy weather most of the passengers, including Philip, were seasick. 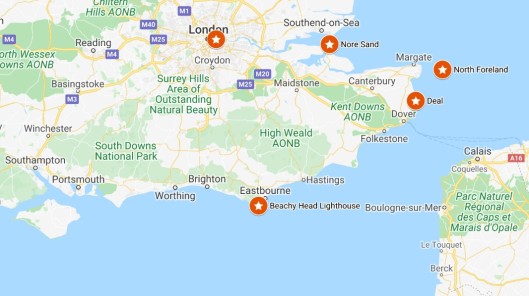 Map showing the places on the journey of the “Dumfries” as it left London. The ship sailed from St Katherine’s Dock on 22 June 1839 and anchored at the Nore sandbank. On 23 June they anchored off the North Foreland. On 25 June they sailed to near Deal and on 26 June Philip and some of his fellow passengers went ashore. In the afternoon of 26 June they sailed from the Downs near deal and it took them til 1 July to clear the channel tacking between Beachey Head and the coast of France.

The “Dumfries” arrived in Port Adelaide on Sunday October 11, 3 months 10 days after clearing the Channel on 1 July and 3 months 19 days after leaving London.

On page 91 of the memoir Philip wrote he was persuaded by his brother William to take out as a servant a man named Lowerburgh (or similar, MS unclear) and his wife and daughter. Philip wrote, “William had known them at Ascot, I did not want them but this was a cheap way for them to emigrate under the Commisr’s regulations.” I assume that the Lowerburgh’s are among the unnamed 27 in steerage mentioned in the South Australian Register‘s report of the arrival of the “Dumfries” on 19 October 1839. However, I have found no trace of them in South Australia under that surname or variants of it.

In later life Philip Chauncy expressed no regret about leaving England. He had made sure to do some sightseeing of London before emigration. He was consoled by the fact that his family intended to emigrate too (and that intention was indeed mostly fulfilled).

Below are pages from Philip Chauncy’s memoir concerning his departure from London, retrieved from the State Library of Victoria. 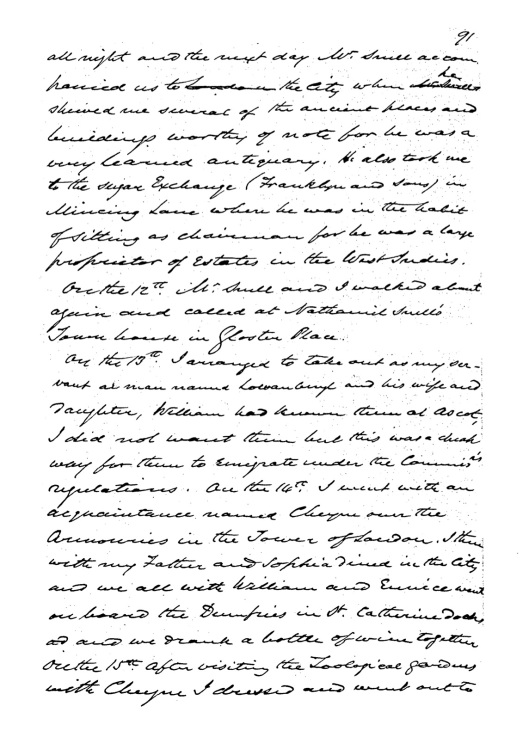 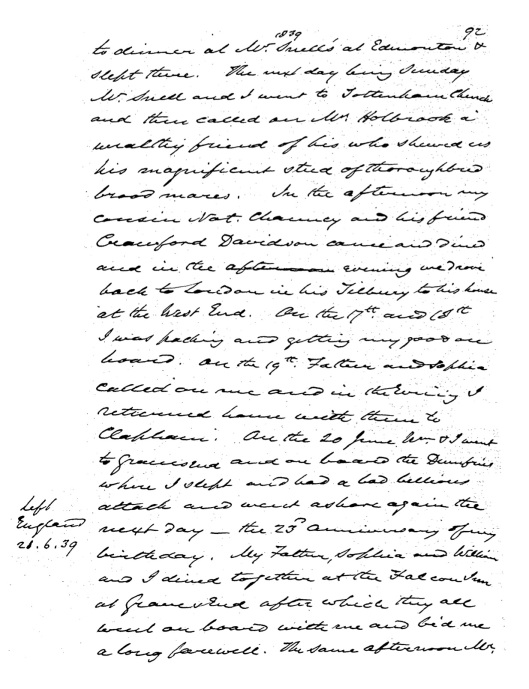 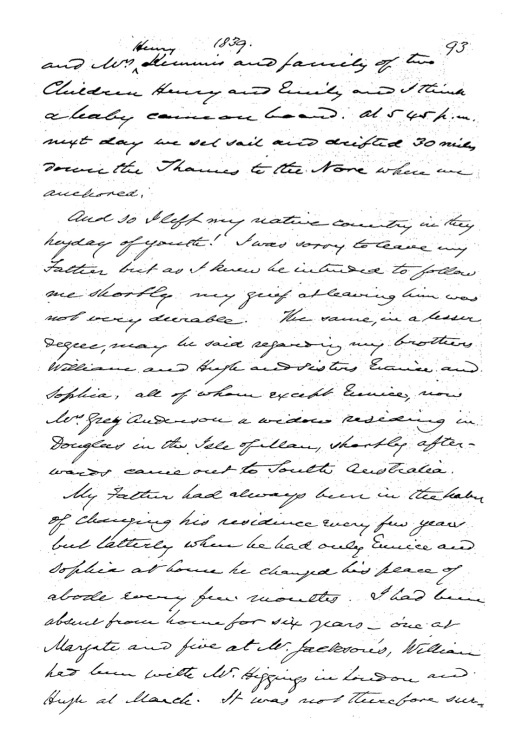 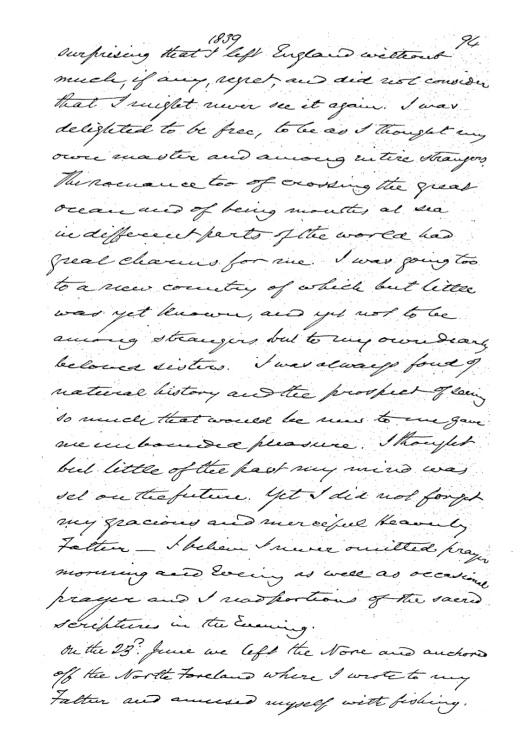 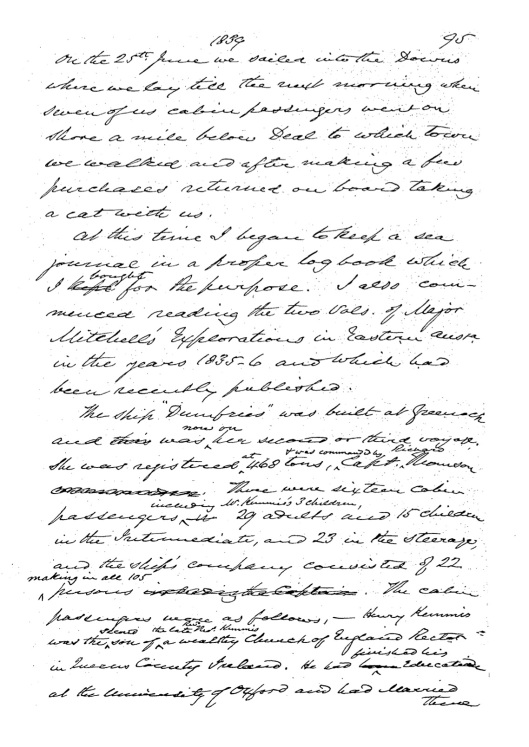 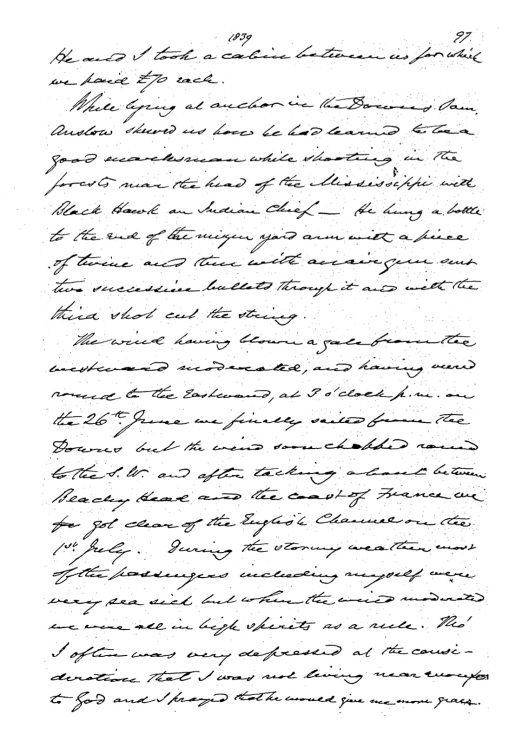 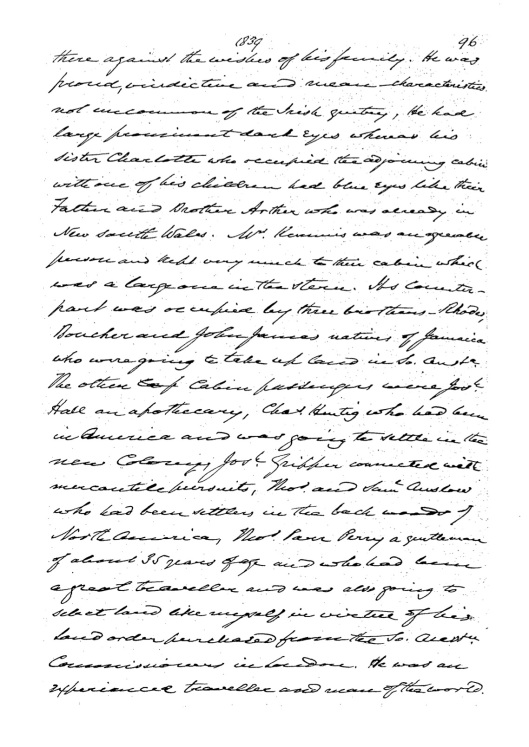 7 thoughts on “E is for emigration”