In April 1919 the Adelaide weekly ‘Critic‘ claimed that because of the chaos Spanish flu had caused nothing could be planned.

Further down the page there was a discussion of plans for a Victory Ball to be held two months off, on 5 June, with a dance for juveniles on the following night. The proceeds were to be in aid of the Cheer-Up Society, an organisation for the aid and comfort of Australian soldiers passing through Adelaide. My great grandmother Mrs A.M. Cudmore, who was on the executive committee, keenly supported this effort on behalf of returned men.

At first it was planned to hold the Ball in the Exhibition Building on North Terrace, but this was being used as an isolation hospital for influenza patients.

Though a Peace Ball was cancelled in Sydney because of the influenza outbreak, Adelaide’s Victory Ball went ahead at the Adelaide Town Hall.

On the afternoon of the ball Mrs Cudmore supervised a rehearsal for debutantes.

Depicted in the sketch … is the elegant gown worn by the Mayoress at Government House on the occasion of Admiral Viscount Jellicoe’s visit, also at the Victory Ball on Thursday. This frock is composed of supple black satin, with an overdress of tulle, weighted by steel and gold embroidery. The corsage permits a peep of gold tissue between the less diaphonous fabrics with what is at hand. A short length of widish insertion, rather open and bold in design, can be turned to endless account.

In July 1919 there was another ball, the University Ball. This time Mrs Arthur Cudmore had the job of supervising sixty-four debutantes carrying posies tied with ribbons in University colours.

1919 Adelaide: Guests attending a ball (not specified), possibly for debutantes in a hall decorated with garlands of flowers in Adelaide. Image retrieved from the State Library of South Australia PRG-280-1-29-65 and subsequently colorised using the MyHeritage photo colorizing tool.

The influenza epidemic, it seems, had little effect on Adelaide social life.

15,000 people died in Australia from the 1918-19 pandemic out of a population of 5 million. 40 per cent of Australia’s population was infected by the influenza but its subsequent death rate of 2.7 per cent per 1,000 members of the population was the lowest recorded of any country during the pandemic. Worldwide 50 to 100 million people died. The first Australian case was recorded in January 1919 in Melbourne,
Victoria. The virus spread to New South Wales and South Australia, with these States closing their borders to limit the spread of the virus.

Travellers from South Australia to Melbourne were not allowed to return home to South Australia. Quarantine was offered in association with soldiers who were being quarantined on Kangaroo Island and in two other camps. Eventually several hundred travellers from Adelaide were allowed to travel back to Adelaide on heavily guarded trains having signed declarations that they had taken every precaution not to be exposed. A quarantine camp was set up on Jubilee Oval next to the Torrens River. There were 100 military tents and more accommodation was set up in the adjacent Machinery Hall. About 640 people who had been visiting Victoria and elsewhere were quarantined at the site.

It was said that many people quarantined at Jubilee Oval treated the experience as an extended holiday and, cleared of the infection, were reluctant to leave. 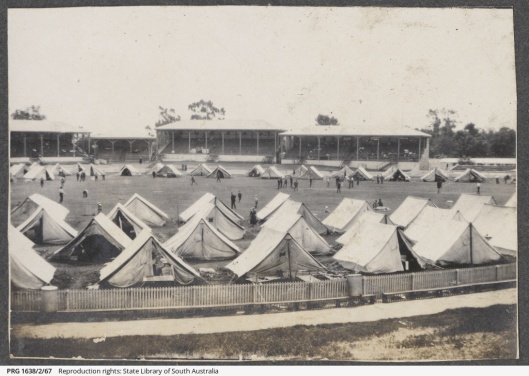 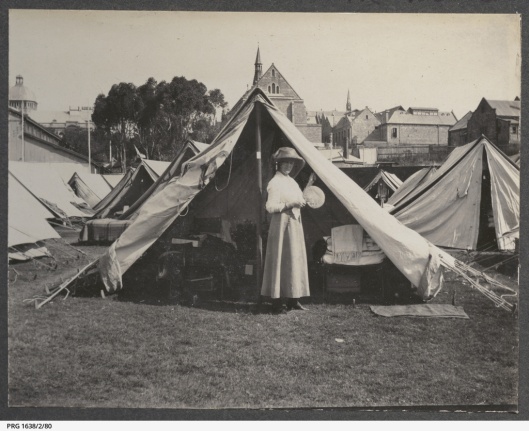 Below the well-advertised cheerfulness, however, was an ugly truth. The Spanish flu was extremely dangerous. In South Australia 540 people died of the flu, the equivalent in today’s population of 15,000. No Australians have yet died of COVID-19. 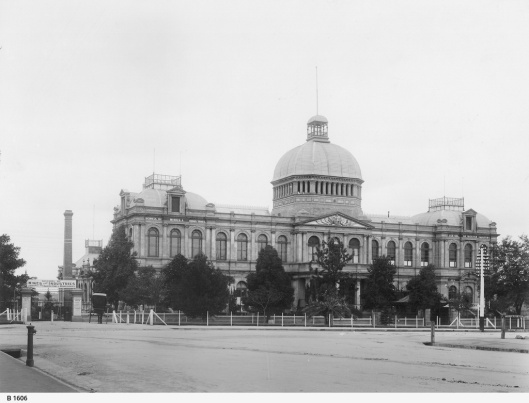 2 thoughts on “A masked ball”