From time to time I look over various online resources for my family tree to see if anything interesting has been added. Recently I went back to the Genealogical Index of Names, an eclectic database of personal names from material in the Genealogical Society of Victoria library and elsewhere.

Among the 103 items for the name Crespigny I noticed:

The more detailed record has:

P.C. (Philip Champion) Crespigny was my great grandfather. I hadn’t noticed this incident before.

There was a report of the theft in the digitised newspapers that can be retrieved through Trove, but the text-recognition software had done a poor job of transcribing the faint image of the newspaper. The extracted text was quite garbled; no wonder I hadn’t seen it when I’d searched on Trove before for ‘Crespigny’.

The incident gives me a little bit more information about Philip Crespigny’s life on the goldfields. To be living in a tent probably means that his wife and children were not with him at that time and had stayed behind in Melbourne.

Peter Robinson, accused of stealing the brandy, was tent-keeper to Mr Crespigny, resident Gold Commissioner. He was found not guilty.

Philip Champion Crespigny was appointed Assistant Commissioner of Crown Lands for the Gold Fields on 18 November 1852 (Gazetted 14 October 1853). When gold was discovered in great quantity in the colony, the governments of New South Wales and then Victoria followed British law at and asserted the right of the Crown to all gold that was found, requiring anyone who sought to mine it must hold a licence. Commissioners and Assistant Commissioners were appointed to administer each new field, to adjudicate disputes and, most important, to collect payments for the licences. 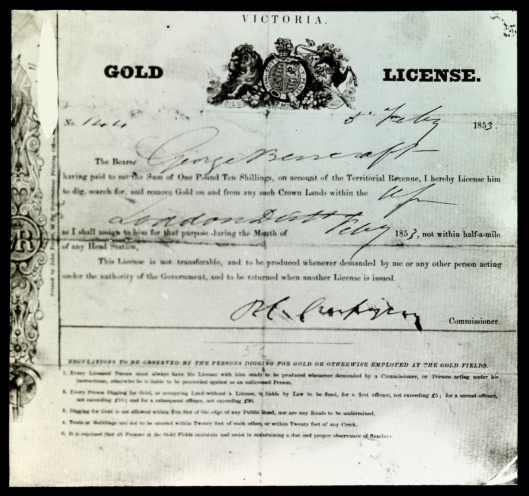 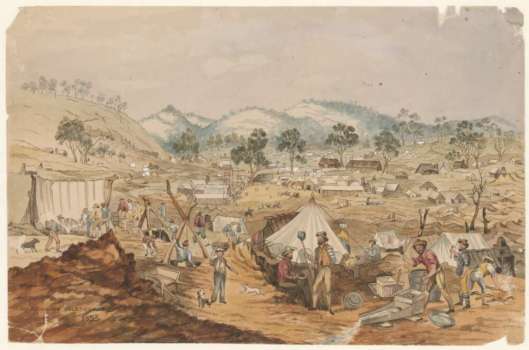 Mt. Alexander gold diggings, 1853 watercolour by William Bentley in the collection of the National Library of Australia retrieved from from http://nla.gov.au/nla.obj-135588436 [Mt Alexander diggings were at Castlemaine]

1 thought on “Brandy for the clerk”