On Wednesday 8 May we drove north from Bath, calling in at the village of Whitmore in Staffordshire, near Stoke-on-Trent, to visit some of my cousins. On the way we stopped at Tewkesbury, near Cheltenham in Gloucestershire, to look at the abbey there. From Whitmore we went on to West Didsbury near Manchester, our next base.

One of my fifteenth great grandfathers, William Vaux (1435 – 1471), who fought in the War of the Roses for the Red Rose of Lancaster, was killed at the Battle of Tewkesbury on 4 May 1471. He is said to have been buried at the Abbey, but I have been unable to find any record of this in the Abbey archives, and the list of inscriptions in the Tewkesbury Abbey church does not mention his name. This didn’t matter, for if you had an untraceable ancestor said to have been buried somewhere you couldn’t do better than not have him in Tewkesbury. It’s a lovely old church, said to be the one of the finest Norman abbeys in England. 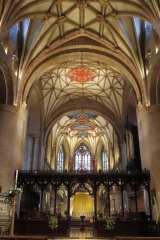 We drove on to Whitmore and had lunch and an edifying chat with my cousins about Brexit, which turns out to be a plot to deprive England of its sovereignty, like 1066. At least one Australian present was reminded of the joke about a headline in an English newspaper that read, ‘Fog in Channel. Continent cut off’. On the other hand, the German car we had hired was showing unmistakable signs of having been designed and assembled by a committee of bureaucrats in Brussels, so who knows? 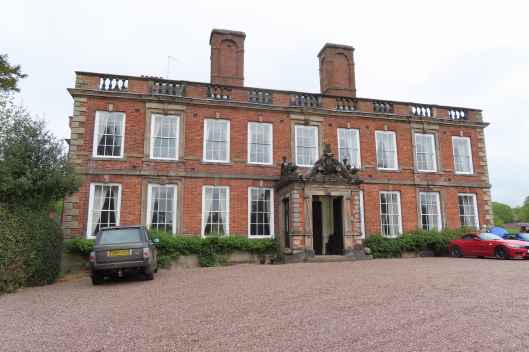 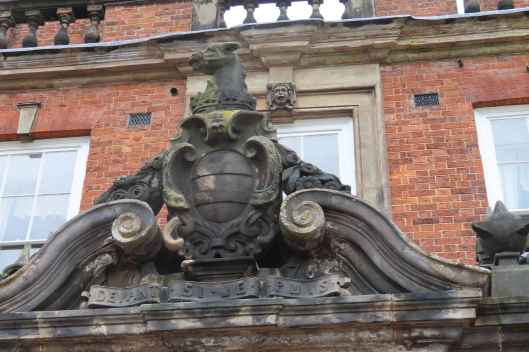 The Eureka flag was flying, a present we had sent to England some time previously. There is a family connection other than cousins from Ballarat; a Cudmore cousin fought at Eureka (on the Government side).

Lunch was served on the family’s Minton china, commissioned by my great uncle Rafe Cavenagh-Mainwaring (1906 – 1995), a copy of a setting that his great great grandfather (my fourth great grandfather) Rowland Mainwaring (1783 – 1862) had ordered. Time moves slowly in the pottery towns, and Minton apparently still had the records from the first commission to run up a second one. When you got to the bottom of your plate, there was the family crest, an ass’s head on a crown. The motto is ‘Devant si je puis’ [Forward if I Can], a useful reminder to wait for the next course.

We had a tour of the house and stables and saw many family portraits. The house, now listed with Historic Houses, is open to the public. Our guide seemed very knowledgeable on the family history. In one or two places a section of the modern wall had been removed to expose the original structure. This had an interesting consequence. Breaching the wall had allowed a ghostly lady from an earlier era playing ghostly old music to wander into the present. There has been a house on the same site for over 900 years and it has belonged to the same family since the time of the Domesday Book in 1086, so I suppose you’d expect an apparition or two. 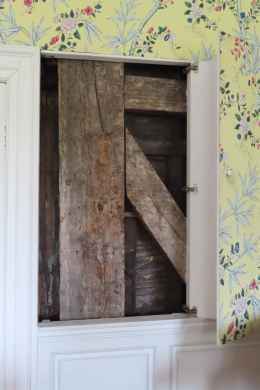 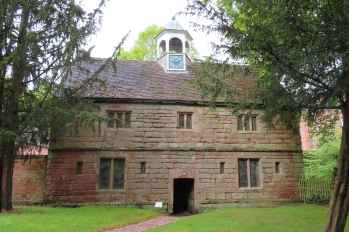 My fourth great grandfather Rowland Mainwaring kept a diary, now stored and displayed in an upstairs sitting room. Several volumes have been stolen unfortunately, probably souvenired by visitors. While we were at Whitmore my son Peter photographed some pages of the diary for me, including, sadly, the last entry, written by Rowland Mainwaring on the day he died.

Before we left we visited the churchyard and some family graves.

5 thoughts on “Travelling north with lunch at Whitmore”