Edmund entered Harvard in 1756 and graduated in 1759. After a brief apprenticeship with a local doctor, he travelled to England, never to return. By 1764 he was at Edinburgh, perhaps he was studying medicine and science at the university. 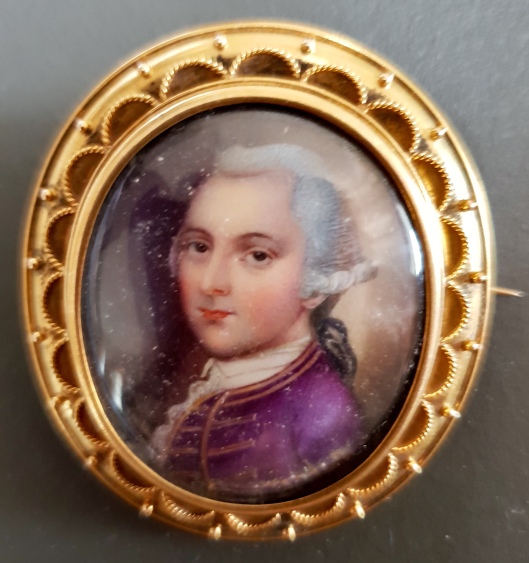 The Reverend Edmund Dana (1739-1823) A miniature in the possession of my father.

The couple moved to London where their first three children were born.

On 18 December 1768, at a ceremony in the Chapel Royal of Whitehall, Edmund was ordained a deacon of the Church of England. Two months later he was made a priest and appointed as Vicar of Brigstock Northamptonshire with the chapel of Stanion in the Diocese of Peterborough.

In a letter to his father Richard, written soon after his appointment to Brigstock he explained his new situation and his decision to abandon his medical studies:

My living has been magnified beyond measure, but I have great privileges in it [wh[ich] no other person ever had upon acc[oun]t of its being upon an Estate of Mr Pulteney. I really understood before I took the gown that whatever deficiencys it labor[e]d under Mr Pulteney w[oul]d make good.

In effect, therefore, Edmund had accepted the assurances of his wife’s family, notably of his wife’s uncle William [Johnstone] Pulteney (1729 – 1805), that a career in the church would be assured and well paid. The parish of Brigstock itself was controlled by the Crown through the Bishop of Peterborough, but Edmund’s letter indicates that the land was owned by William Pulteney and that his basic salary would be supplemented. Given the influence of his wealth and position, it would not have been difficult for Pulteney to persuade the bishop to find a place for his niece’s husband.

In November 1772 the Reverend Edmund Dana took up new duties as Vicar of the parish of Wroxeter in Shropshire, in the diocese of Coventry and Lichfield. Wroxeter is a village five miles east of Shrewsbury. William Pulteney had first entered Parliament in 1768 as member for Cromartyshire in Scotland, but he had substantial interests in Shropshire and had also contested the seat of Shrewsbury. Successful at the 1775 election, he held the borough until his death in 1805. Because of the property William Pulteney held, he was patron of several livings in the area: that is, he had authority to name the priest who would head the parish as rector or vicar. The previous incumbent at Wroxeter, Robert Cartwright, had died, and the vacancy was free for Pulteney to nominate his nephew by marriage.

Edmund Dana and his family  settled in the region of Shrewsbury, and William Pulteney continued his support. In 1775 the living of Aston Botterell became vacant through the death of the former Rector Nehemiah Tonks, and Edmund Dana was appointed his successor.

In 1781 Edmund Dana received two further appointments as Rector: to Harley and Eaton Constantine. Both parishes were in the diocese of Coventry and Lichfield and both lay southeast of Shrewsbury, Eaton Constantine just two miles from Wroxeter and Harley a couple of miles further. The livings were formally in the gift of a certain John Newport, but Newport was under age and William Pulteney was his official guardian.

Helen continued to bear children: thirteen, nine girls and four boys, in twenty-one years. Three died in infancy. Helen died at Shrewsbury on 17 April 1795, aged about forty-five, and was buried at Wroxeter on 22 April. She and Edmund were married three months short of thirty years; he did not marry again.

Though Edmund Dana had no previous contact with Shropshire, the patronage of William Pulteney gave some status to the newcomer. Wroxeter is a notable parish: a short distance east of Shrewsbury, it occupies the site of the ancient Roman town of Uriconium. Some time after his arrival, Edmund Dana became a local magistrate.

An early supporter of the great engineer Thomas Telford, William Pulteney arranged for him to work on the refurbishment of Shrewsbury Castle during the 1780s, and a few years later had him appointed Surveyor of Public Works for the county, where he constructed roads, bridges and canals. Edmund Dana was a member of the trust concerned with roads and streets, so the two men were at least acquaintances. When Telford was commissioned to construct a new prison in the city, close to the castle, Dana had Telford construct a passage from the castle, across the line of the present-day railway, to the main entrance of the prison and then some distance along the River Severn. The route became known as The Dana, and local custom applied the same name to the prison itself. 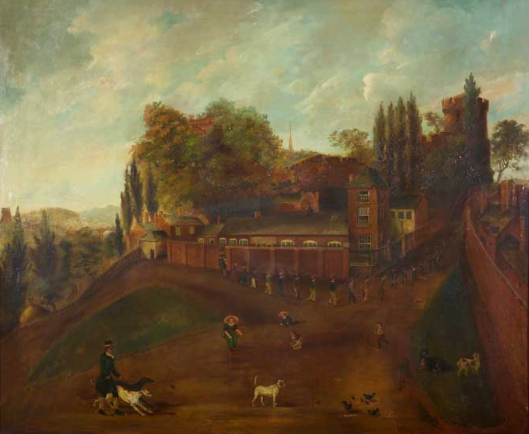 Former HM Prison Shrewsbury viewed across the road named The Dana at the end of May 2014. The prison constructed during 1787-1793, closed in March 2013.

Some sources claim that Edmund Dana lived in Castle Gates House, close to the entrance to the castle, and it is possible that for a while he did. From the time that he arrived there, however, all his children were born and baptised at Wroxeter, and his wife Helen died and was buried there.

In 1856 Edmund’s great-nephew Richard Henry Dana Jr (1815 – 1882), grandson of Edmund’s brother Francis, visited England and spent three days at Shrewsbury. On the first day he met his cousin Anna Penelope Wood nee Dana (1814 – 1890), Edmund’s grand-daughter. Anna’s husband William Henry Wood escorted him on a tour of the city. Richard Dana was shown the Dana Terrace, “principal walk of the castle, and named from the Rev Edmund Dana, who planned it.” He also saw an old house with black timber cross-beams, where the future King Henry VII was said to have spend the night on his way to defeat Richard III at Bosworth in 1485. There was no mention, however, of Edmund Dana living in the city and, since Anna Penelope Wood nee Dana was nine years old and living near Shrewsbury when her grandfather Edmund died in 1823, she probably would have remembered it if he had.

Richard Henry Dana’s diary entry for the following day, Sunday 10 August, records how he accompanied Mr and Mrs Wood to Wroxeter, where they attended the evening service. In somewhat romantic style, he tells how:

Wroxeter is a fair specimen of the old English parish Church, parsonage and village. . . The church stands in the midst of the graves of the villagers, and the vicarage opens into the Church Yard. In this vicarage, lived and died, Edmund Dana, my grandfather’s only brother. Here he officiated from 1766 to 1823 – a period of fifty seven years. Here he brought his beautiful noble bride, a peer’s daughter, in the bloom of her charm, and here he laid her, under the stone of the chancel, at middle life, the mother of twelve children, loved and honoured by all. Here he lies by her side, and here most of this children are buried. . . . . Here grew up, here played, here walked and studied, and loved, and married, those beautiful daughters, whom Mrs President Adams [ Abigail Adams nee Smith] says were the most elegant women she saw in England, and whom George III called the roses of his court.

He goes on to describe the church itself, with the tombs of Edmund Dana, his wife Helen, and several of their children, placed before the chancel.

Richard Henry Dana remarked that the Wroxeter local bridge, a Roman column in the churchyard, and several trees were named in memory of Edmund Dana who had died 33 years earlier, while the old people of the parish still call him the “old gentleman”, and look upon the present rector, who has been here twenty years, as the “new vicar”, and complain of his innovations.

9 thoughts on “S is for Shrewsbury”