A few years before he died Peter spent an afternoon going through the photos with me, explaining where they were taken and naming the people in them. I wrote this information on the backs of them, and I’m very glad that I did, for without this it would be very difficult now to work out who was who. Even so there are gaps. I can’t identify all the people in every photograph.

The photos below are of Peter’s cousins, who lived at Carwarp, near Mildura. He called them the Mallee kids.

When they married George and Elsie Cross moved first to Ouyen then to Ginquam West, close to Mildura. Not long afterwards, they took up a wheat and sheep farm at Carwarp, about 30 kilometres south.

The Mallee dry and harsh, tough to farm, and many Soldier Settlers couldn’t make a go of it. George Cross, however, ran his farm there until near to his death in 1962 when his son Alex  took it over.

One of George’s grand daughters remembers the farm was

640 acres & dry land cropping. Wheat & sheep as l recall. He apparently said that if it were irrigated, he could grow anything. It’s now a winery !

Some of the frustration of Soldiers Settlers can be detected from a letter George Cross wrote to the Soldiers’ Settlement Board in 1923: “My wife and family left here on the 10 January last as I did not consider that the camp we were living in was fit for any woman to live in. I have since pulled it down and there is no possibility of their return until such time as someone at your end comes out of their trance and gets the job done.” His wife and children rejoined George Cross at the end of the year.

The Cross’s farm was 640 acres, 1 square mile (just under 260 hectares), the size of the average Soldiers Settler farm. It was new country, not previously cultivated.

In 1929 George Cross gave evidence to a committee looking at the size of viable farms (see below).

In 1935 an inspector of George Cross’s wheat and sheep farm noted “ the eldest boy assists with all the farm work”. Jim Cross was then 16 years old. “The Limits of Hope”, a history by Marilyn Lake of post-WW1 Soldier Settlement, notes that the work of grown-up children often contributed significantly to a farm’s success. 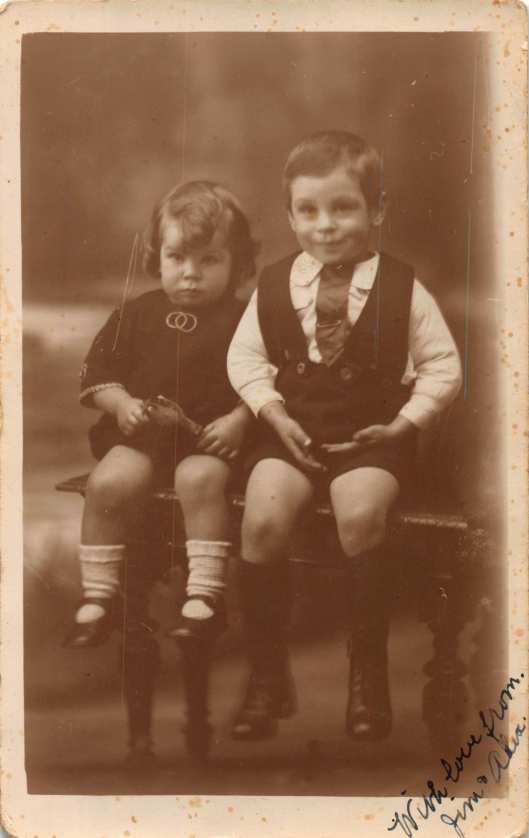 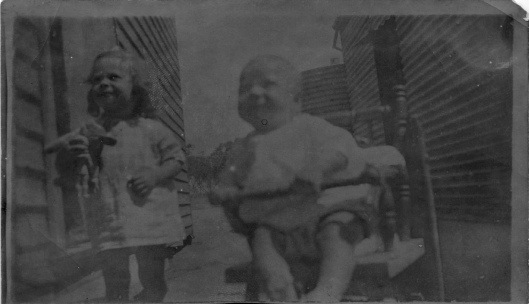 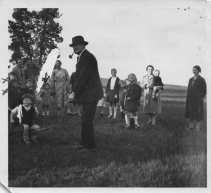 “This was taken at a Birthday party last August. I put a mark near Jim & Alex. I am in the shade of the tree with Fred in my arms & Elsie is along side of me.” Caption presumably by George Cross. Fred was born September 1924 and looks about 2 in the photo so I think the photo dates from August 1926. Jim would have been 7, Alex 5 and Elsie 3. 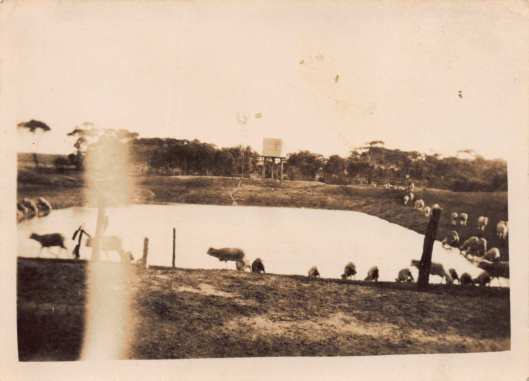 “This was taken from the lower end of the dam looking towards the house.”

“This is rather a good view, only the top of the mill is cut off. Better luck next time”

“Do you recognise this building?” I am not sure why FJ or Ann Jane Cross should recognise the building – was it moved from Homebush to Carwarp?

“This is a good view of the mill & tank. The three boys up the ladder. Alex at the top.”

3 thoughts on “The Mallee kids”