My 11th great grandmother was Temperance Crew nee Bray (abt 1580 – 1619). She was the wife of Sir Thomas Crew (1564 – 1634), a lawyer and politician. His entry in the History of Parliament online mentions his marriage to her, noting that she was the daughter of Reynold Bray of Steane and a kinswoman of the 7th Earl of Shrewsbury, Gilbert Talbot (1552 – 1616). Temperance, her father who died in 1583, and her and Thomas’s son John, are also mentioned in her husband’s entry in the Dictionary of National Biography.

Reginald Bray died in October 1583 and was buried at Hinton in the Hedges on 18 October 1583. Reginald was aged about 44.

An inquisition post mortem was held (Esc. 26 Eliz. n. 119.) This was a local enquiry into the lands of a deceased person, held to discover what income and rights were due to the crown. Information from this inquisition was used to produce a family tree by George Baker in his 1822 book History and Antiquities of the County of Northampton (page 685).

Reginald had one son, William, who died in his father’s lifetime aged about 7. Reginald had five daughters who were his coheirs: 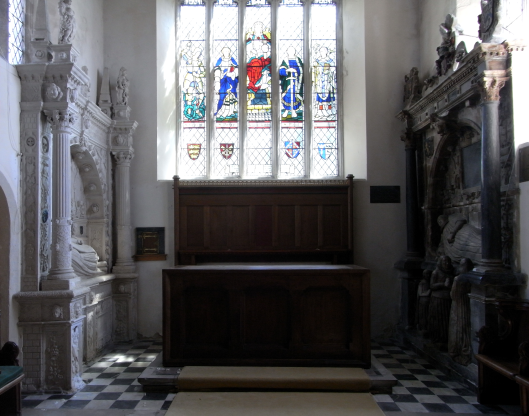 The chancel of Bovey Tracey Church, Devon looking eastward. On the left (north) side , the monument with effigy of Nicholas Eveleigh (d.1618); on the south side the monument with effigy of Elize Hele (d.1635), who married Eveleigh’s widow Alice Bray. Photograph by Wikimedia commons user Lobsterthermidor [CC BY-SA 3.0], retrieved from Wikimedia Commons 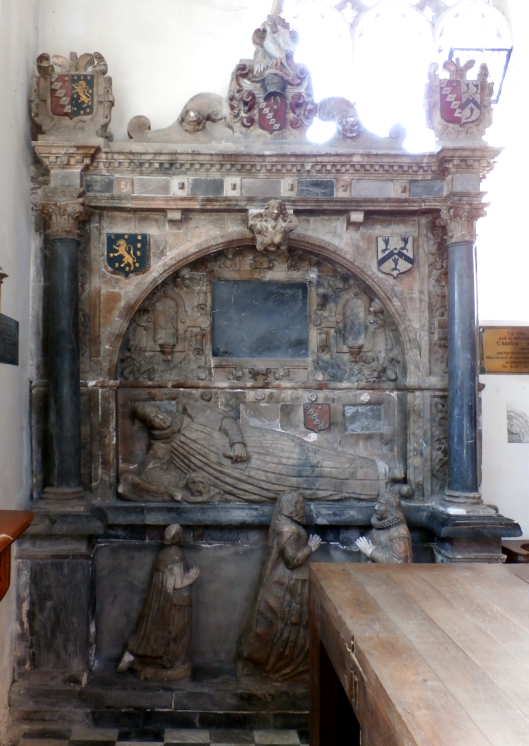 Monument to Elize Hele in Bovey Tracy Church, Devon. Below his effigy are the kneeling effigies of his two wives, facing each other in prayer, behind the left one kneels his young son. Photograph from Wikimedia Commons by user Lobsterthermidor [CC BY-SA 3.0]

In 1596 Temperance married Thomas Crew (1665 – 1634). Temperance was a kinswoman of Gilbert Talbot, 7th Earl of Shrewsbury (1552 – 1616). Thomas Crew was in the service of the Earl. Thomas had been educated at Shrewsbury School and the Inns of Court.

Thomas Crew was first elected to Parliament in 1604 representing Lichfield.

Temperance and Thomas had nine children: 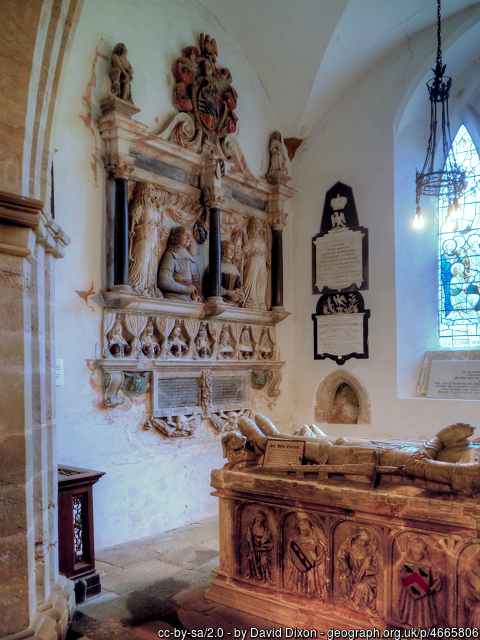 Sir Thomas rebuilt the chapel of St Peter at Steane in memory of his wife who was buried there and an altar Tomb bears her figure and that of Sir Thomas dressed in his Sergeants robes.On a tablet is this inscription:

“Temperans Crewe, the wife of Thomas Crewe, esq. And one of the daughters and coheirs of Reginald Bray, esq. By his wife Anne, his wife, daughter of Thomas Lord Vaux, died in the year of our Lord 25 October, 1619, in the year 38 of her age, and now restith from her labours, and hir works follow hir:
A daughter of Abraham here doth lye
Returned to her dust
Whole life was hid in Christ with God
In whom was all her trust
Who wifely wrought while it was day
And in hir spirit did watch and pray
To heare God’s word attentive was her care
Hir humble hart was full of holy feare
Hir hande which had good blood in every vaine
Yet was not dayntye nor did disdayne
Salve to applye to Lazarus fore
And was inlarged to the poore
Lyke God’s Angells she honor’d those
That taught his word and did his will disclose
And persons vile her hart abhor’d
But reverenst such as fear’d the Lord
A true Temperans in deed and name
Now gone to heaven from whence she came
Who with her lott was well contented
Who lived desired and dyed lamented.
Premissa non amissa, discessa non mortua
Conjux casta, parens foelix, matrona pudica,
Sara vivo, mundo Martha, Maria deo.”
[Having never lost, went out without having died, = Not lost, but gone before
A chaste wife, a happy parent, a modest lady,
A living Sara, a worldly Martha, Maria of god.]

Photographs of the chapel and the monument can be seen by clicking the links below:

To the end of his life Sir Thomas Crew continued to practice law.

Portrait of Sir Thomas Crewe, Speaker 1623 – 1625. Given by his descendant Ralph Cartwright, Esq. 1805. In the collection of the UK Parliament (catalogue number WOA 2702) Crew displeased James 1 by upholding the liberties of Parliament as ‘matters of inheritance, not of grace’ but later said by the King to be the ‘ablest Speaker known for years’.

Crewe died on 1 Feb. 1634, aged 68, and was buried with his wife under the  marble effigy in the chapel he had built at Steane. His funeral sermon praised the quickness of his wit, the firmness of his memory, and the readiness of his expression. He was said to be one who ‘set the stamp of religion on all his courses, in his whole conversation’, ‘a man exceeding conscionable’, ‘a marvellous great encourager of honest, laborious, religious ministers’, ‘the poor man’s lawyer’, and ‘a great lover of his country’.