This is my fifth “Blogging from A to Z Challenge“. This year I wrote about 26 people in my family tree whose personal name starts with a different letter of the alphabet.

It was quite a task, but that’s the “Challenge”, after all.

I chose the person for each letter well in advance, giving me more time for research.   X was a bit tricky, of course, and I had only one U to work with. Other letters gave me more choice.

Half the posts were about women (“Women hold up half the sky”, declared Chairman Mao), and many of the stories – though not intentionally chosen for it – had at least a touch of religious colouring. I am pleased to have been able to include one of my German forebears. 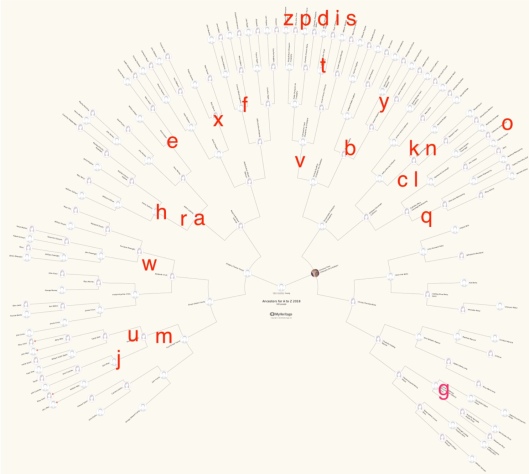 My family tree, with my husband Greg’s, showing the locations of the people I wrote about. [This   Sun Chart generated using MyHeritage.]

This year there were more detailed categories to choose and one of those was “genealogy”. Through the month I was pleased to follow some fellow genealogy bloggers and I appreciated their support and encouragement through the month:

During the month I followed some other entertaining blogs as well.

I look forward to participating next year.