My third cousin four times removed, who was also the sister-in law of my third great uncle, was Dr Lilian Helen Alexander (1861-1934), one of the first woman doctors in Australia. 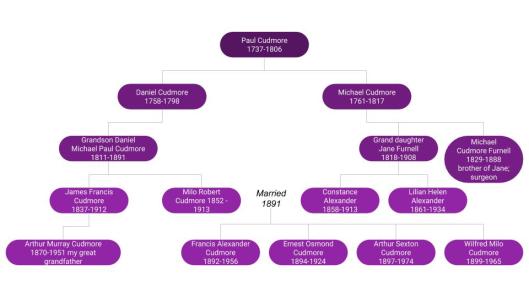 The Alexanders lived in South Yarra. Thomas was employed as a printer for the Government but lost his job in the Victorian Government political crisis of January 1878. In 1878 and 1879 he operated a bookselling business. From 1873 Jane, Mrs Alexander, ran a Ladies’ College, which took boarders, called “Lawn House”. This began at William Street, South Yarra. From 1879 the school advertised that the principals were Mrs Alexander and the Misses Alexander: Lilian and Constance were teaching too. In 1883 the school moved from William Street – Lawn House was required by the railway – to Springfield House, 13 Murphy Street, South Yarra, later renumbered to 17.

Lilian was educated at her mother’s school and then for one year at Presbyterian Ladies’ College. In 1883 she entered the University of Melbourne as one of a small group of women who studied Arts. She was the first woman student of Trinity College. She gained her Bachelor of Arts degree in 1886 and her Master of Arts in 1888. The 1887 advertisement for the school proudly announced her achievements.

In 1887 Lilian applied to study medicine and was one of the first women medical students at Melbourne. She obtained her Bachelor of Medicine in 1893 and her BCh (Baccalaureus Chirurgiae or Bachelor of Surgery)  in 1901.

In 1895 Lilian was inaugural secretary of the Victorian Women’s Medical Association, and later its president. Her first appointment was at the Women’s Hospital in Carlton, and she was one of the inaugural staff members of the Queen Victoria Hospital for Women and Children, which was established in 1897.

Milo and Constance had four sons:

In April 1936 Arthur Sexton Cudmore and his two surviving brothers, Francis Alexander Cudmore and Wilfred Milo Cudmore  presented a bas relief sculpture by the notable Australian sculptor Web Gilbert to the University of Melbourne in honour of their aunt Dr Lilian Helen Alexander.

The sculpture “Wheel of Life” by Web Gilbert in the foyer of the Medical Building Grattan Street, University of Melbourne. 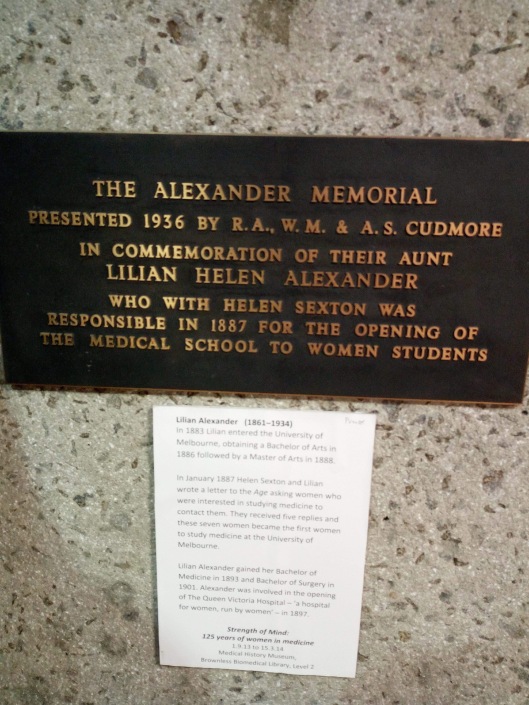 9 thoughts on “L is for Lilian”