Marie was born in about 1655 in France and came with the rest of her family to England after the revocation of the Edict of Nantes.

On 13 May 1698 she married Jacques Feillet at the French Protestant Hungerford Chapel, Hungerford Market at Charing Cross on the Strand, London. Jacques or James died in about 1728, his will dated 1726 left everything to his wife Marie.

Mary Feillet made her will on 17 April 1736. She died not long after and the will was proved at London on 7 June 1736. She named her brother, sisters, nephews, and cousins in the will. 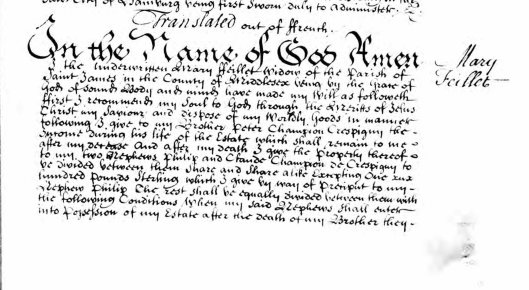 Translated out of ffrench

In the Name of God Amen
I the underwritten Mary ffeillet widow of the Parish of
Saint James in the County of Middlesex being by the Grace of
God of sound Body and mind have made my Will as followeth –
ffirst I recommend my Soul to God through the Meritts of Jesus
Christ my Saviour and dispose of my Worldly Goods in manner
following I give to my Brother Peter Champion Crespigny the
???? during his life of the Estate which shall remain to me
after my decease And after my death I give the property thereof
to my two nephews Philip and Claude Champion de Crespigny to
be divided between them Share and Share alike Excepting One
hundred pounds Sterling which I give by way of ??? to my
Nephew Philip The rest shall be equally divided between them with
the following Conditions when my said Nephews shall enter
into Possession of my Estate after the death of my Brother they

faithfully translated out of ffrench London the
first day of June 1736. Which I attest Pet. St Eloy
Notary Publ.

This Will was proved a London before the Worshipful
John Andrew Doctor of Laws Surrogate of the Right
Worshipfull John ??? Doctor of Laws Master Keeper
Commissary of the Prerogative Court of Canterbury lawfully ???
constituted the Seventh day of June in the year of our Lord one
thousand Seven hundred and thirty six by the Oaths of Philip
Champion de Crespigny and Claude Champion de Crespigny the
Executors in the said Will named to whom Administration was
granted of all and singular the Goods Chattells and Credits of the
said deceased being first Sworn duly to Administer.

1 thought on “The will of Mary Feillet née Champion”