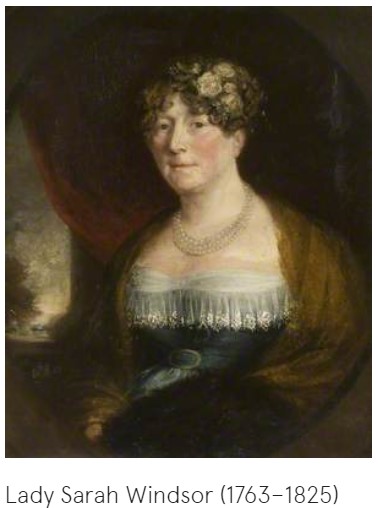 This week’s Sepia Saturday prompt reminded me of a newspaper report of an attack by the London mob on Lady Sarah and her child while they were travelling in her carriage. The incident was reported in the London Morning Post of 20 April 1801.

In 1801 Sarah had seven children. There had also been an eighth child who had died in infancy. The oldest child was 14 and the youngest was one year old. I do not know which child was travelling with her. Lady Sarah had two more children after this incident.
I am not quite sure what Lady Sarah’s coach would have looked like.
A stage coach in 1801 was painted by John Cordrey. The passengers in this picture include a wedding party. The milestone apparently shows this coach is eight miles from London.

The attack on the coach must have been a terrifying experience for Sarah and her child. There are reports of other attacks on coaches in the period including the murder of the occupants and highway robbery by gangs of 40 men. (Carlow County 1801  http://www.rootsweb.ancestry.com/~irlcar2/PPP_Doc_1801.htm) The King’s coach had been attacked several times in the 1790s. (William TOPLIS (1814). A Genealogical History of the English Sovereigns, from William I. to George III. inclusive … With … biographical notices of the families connected with the Royal Houses, etc. p. 79.)

In 1838, some 37 years later, Lady Sarah’s youngest son Herbert had an accident when his gig collided with a donkey cart on Paddington street.  He was thrown from the gig and broke his leg.