In  Australia, the births, deaths and marriages registration system is known as the Archer system after the man who designed it.

William Henry Archer (1825-1909), a statistician, arrived in the colony of Victoria in December 1852. He had trained and worked as an actuary in England. Legislation had recently been passed to introduce a compulsory system for the civil registration of births, deaths and marriages. Governor La Trobe appointed Archer as a clerk to advise on the new system soon after Archer’s arrival.

In February 1853, in an address to the Legislative Council, the Lieutenant-Governor of the colony of Victoria, Charles La Trobe,  said that the purpose of civil registration was proof of births, deaths and marriages and to assist in tracing pedigrees.

The Melbourne Argus wrote on the importance of the new legislation, in particular the legislation’s intention to minimise disputes about identity.
Civil registration was designed to help resolve questions of identity. New immigrants were so far away from family and from the community they had grown up in, so questions of identity could arise, including when it came to making sure that property acquired in the colony went to the correct next of kin after somebody died.
The Archer system, named after William Archer, is very useful for family historians to trace anyone’s pedigree.

At http://www.jaunay.com/bdm.html , Graham Jaunay, a South Australian genealogist, has usefully summarised what information can be found on civil registration certificates of the Australian (colonies and) states.
New South Wales and Queensland adopted the Archer system from 1856. The other colonies adopted the system later.
Indexes of civil registration certificates are available in various formats, and online. The indexes can also help to identify siblings and other relatives, because information on the indexes usually includes parents.
PDF images of historical certificates can be purchased online from Victoria and Queensland. From the end of April 2014 a similar system will be available for New South Wales.

So, how does it work?

In Australia, historical census returns are destroyed, so we do not have the useful information about families and their location every ten years that those tracing their nineteenth century family history in the United States and England.

Australian birth certificates records when and where the baby was born, the names of its parents, their ages and their birth places, where and when they were married , the names of siblings both living and dead, and who the informant was (usually a parent).

A marriage certificate has the date and place, the names, whether they have been married before or are widowed or divorced, the birthplace of the bride and groom, their occupation, their exact age in years (that is, not just whether the person is over 21), their residence both present and usual, and for both bride and groom, the father and occupation and the mother and her maiden name.

A death certificate gives the name, when and where died, usual place of residence, occupation, cause of death, duration of last illness, when last saw a medical practitioner, name and occupation of father, name and maiden surname of mother, informant, burial, where born and how long in the Australian states or colonies, marriage spouse, at what age and where, and whether the spouse was still living or whether divorced, issue in order of birth with names and ages. Death certificates of course depend on the knowledge of the informant and thus are the least reliable. The subject of the certificate is not in a position to contradict or supplement the information.

The collection of certificates gives a comprehensive history and most people most of the time filled in their details conscientiously.

You learn a lot about people from the birth certificates of their children, their patterns of movement around the country and what jobs they had.  For example, in the case of John and Sara Way, I could follow them through three states, with John changing his occupation from labourer in Adelaide and Melbourne to shepherd near Yass in New South Wales and then to a miner in Parkes in New South Wales. 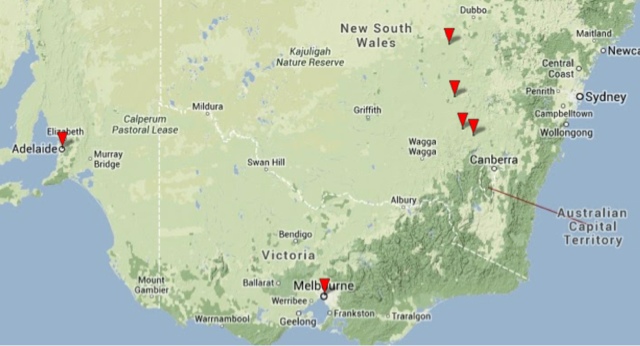 John left very few other pieces of information. He didn’t appear in the newspapers, and we have inherited no letters or diaries. The certificates have been most revealing.

Similarly for George Young. Thanks to the certificates we could follow him from rush to rush until the birth of twins caused him and his wife to settle in Lamplough. He didn’t move when the gold rush there ended.

For Australian family history I believe it is essential for the researcher to purchase  certificates for all members of the family being researched, particularly if the family moved around. With each certificate you learn something new and for many people these are the only records we have of their lives.