This strange case concerns the grave of my fourth great grandfather.

Daniel James Nihill (1761 – 1846) died at SeaView, Adelaide, South Australia on 14 October 1846. He is now buried in the Old Catholic section of West Terrace cemetery, but was first buried in the Protestant section.
The South Australian Register on 30 March 1860, reported a dispute between two of his seven children, James Nihill (1823 -1877) and Frances Fox née  Nihill (1826 – 1895), over the place of burial of Daniel Nihill. James had arranged for his father to be buried in the Protestant section of West Terrace Cemetery. In September 1859, however, he found that his sister Frances had arranged for her father’s remains to be exhumed and reburied in the Roman Catholic section. James took his sister to court over the matter.

At the time that Daniel Nihill’s grave was opened, all that was left were some bones in the place of a decayed coffin.  The bones were placed in a new coffin for re-interment.

Daniel Nihill was said not to have been interested in religion.  James Nihill asserted that his father made only an outward profession of Roman Catholic faith in Ireland because “it was a disturbed period”. However Daniel did not, as far as James knew, attend a Roman Catholic Church while living in South Australia.

Frances was a Catholic. In the court case it was stated she became a Catholic in 1847.  She married Arthur Fox (1817 – 1853) on 26 July 1846.  Arthur Fox was said to have meddled in the Nihill  family’s Protestantism, to the extent of arranging for a priest to visit the day before the death of Daniel Nihill.

Arthur Fox had been in partnership with James Nihill. After Arthur’s death in 1853, James Nihill was a trustee of his estate but had been asked to resign.

There seems to have been several disputes that went to court between James Nihill and Frances Fox since the death of Arthur Fox.

The jury’s verdict was in favour of James Nihill, awarding him 40 shillings and stipulating that the the tomb was to be restored at the expense of the defendant, Frances. However, the judge decided that effect could not be given to the restoration of the tomb. The outcome of the case was thus that Frances Fox had to pay her brother 40 shillings but the body of Daniel Nihill was to be allowed to remain in the Catholic section of the cemetery.

The expenses incurred by James in erecting the tomb and enclosing the site in the Protestant section of the cemetery were reported as being between £30 and £40.

James had retained the South Australian Attorney-General to represent him in court.

I contacted the Adelaide Cemeteries Authority about the case.  They have few records from the 1840s and 1850s. There is a notation in a lease register book that the lease taken out by James Nihill was surrendered in 1856 but with no other detail.  Perhaps this is when Frances arranged the re-interment, although from the newspaper report it seems that James only discovered in September 1859 that his father’s body had been moved.  The Adelaide Cemeteries Authority do not have records about when the Fox family purchased the grave site.  As the Protestant grave site lease was surrendered in 1856, the Authority cannot identify who is using the site now but it seems it was not reused by a member of the Nihill family. 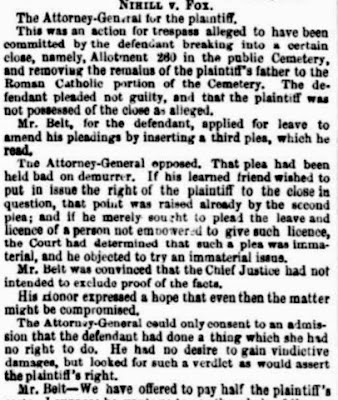 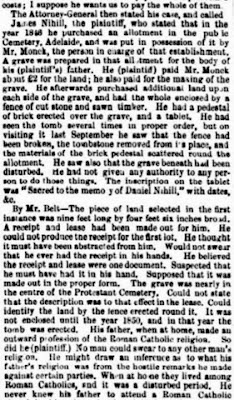 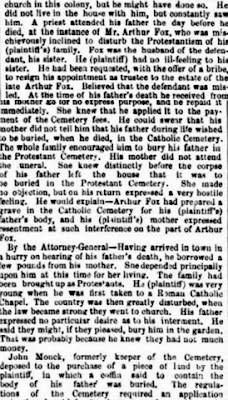 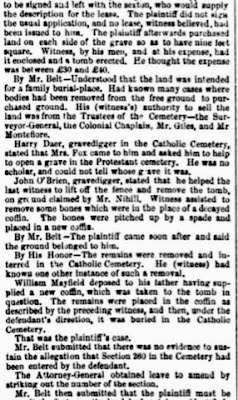 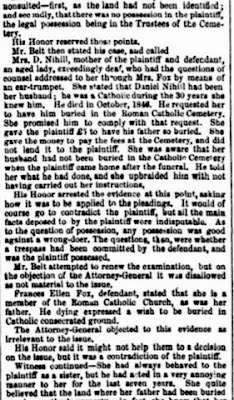 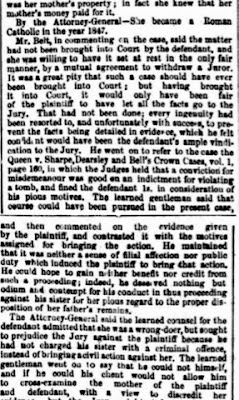 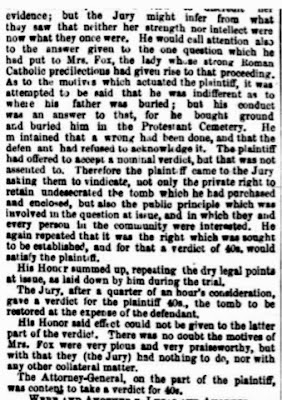